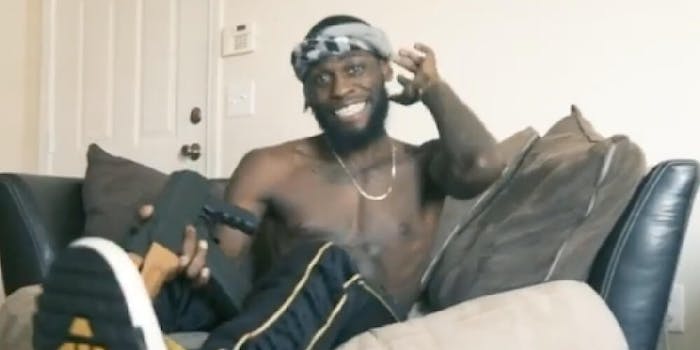 He held large stacks of cash in his photos.

Several phrases have been invented on Twitter. One of those phrases is “telling on yourself,” which this North Carolina man absolutely did.

Arlando Henderson was arrested after allegedly stealing from the vault of a bank that he worked at, according to CNN. An indictment alleges that Henderson stole from the vault on at least 18 separate occasions in amounts ranging between $200 to $13,450. In total, officials believe he stole $88,000.

How do prosecutors know exactly when Henderson started stealing from his workplace? He posted it on social media.

Henderson began working at the bank in April, according to ABC News. By July, his telltale posts began to show stacks of cash. While his Facebook account is no longer available, Henderson’s Instagram is still up.

Henderson posted images holding firearms and large stacks of cash to his Facebook and Instagram profiles. He also posted the Mercedes-Benz that he made a down payment on with the pilfered money.

In a now-deleted Facebook post, Henderson alluded to exactly where his car and money came from, according to Complex.

“I make this look easy but this… really a PROCESS,” Henderson wrote on Facebook.

The money that Henderson allegedly stole was from bank customers’ deposits. Then, he reportedly put the money in his own account at an ATM near his workplace and falsified records to cover the thefts. Henderson was arrested on Dec. 4 in California, about 2,300 miles from the crime, according to Complex.

His charges total an estimated $1.25-million fine and about 40 years in prison.