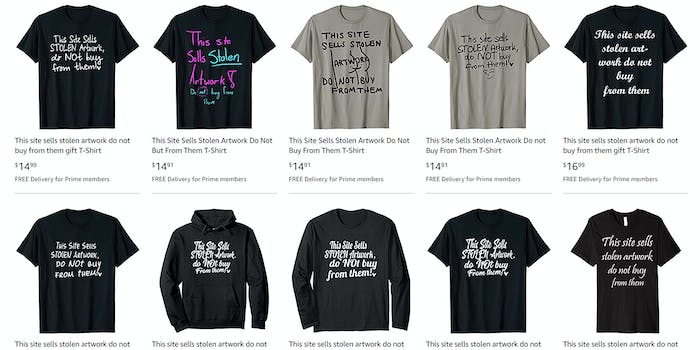 The bots aren't smart enough to recognise a trap. Yet.

Tired of bots appropriating their art for print-on-demand T-shirt companies, some artists on Twitter have struck back. After figuring out that the companies were using bots triggered by the phrase “I’d love to have that on a T-shirt!” and similar variations to steal their designs, they got to work creating the most embarrassing, and potentially actionable, images they could manage and then set them up to be stolen.

This is a calling card for online scam websites, in order to have this message be as effective as possible; we need YOUR help.

The campaign was started by artist and Twitter user @Hannahdouken, or Nana. After seeing a tweet warning artists and fans about the key phrases resulting in stolen art, they responded by making a call out shirt for those companies, tweeting it out and inviting their followers to respond with the magic words and see if any bots picked up on it.

hey can y'all do me a favor and quote tweet/reply to this with something along the lines of 'I want this on a shirt', thank you pic.twitter.com/UhuGRQgU6b

Compared to some of what came next, Nana’s design was actually pretty merciful. There were no cat buttholes, copyrighted characters, or cringy phrases. Just a simple, “This site sells stolen art work, do not buy from them!” followed by a winky face. Factual, informative, and frankly poetic justice for any site that did end up selling it without her say. Which, in response to her fans playing the game and playing it hard, several immediately did.

oh man can you put this on a shirt? or even some stickers or perhaps prints? I would love to buy this if it were on a phone case or a tote bag. i want this. i need this. want. buy. shirt pls

Not to be confused with my fake robot money I would spend on a shirt like that. 🤖

I couldn't belive this was a thing so I looked it up, and… wow. pic.twitter.com/TfYTT0JM03

From there, other artists got on the vengeance train, producing significantly more damning and embarrassing works for people to be stocking. Disney characters were especially popular thanks to company’s lawsuit-happy reputation, but Mario, Bart Simpson and other well-known characters featured too, often paired with statements the copyright holders would find particular embarrassing or otherwise problematic.

Would you like to help hard working artists who struggle only get their art stolen and put on t-shirts? Respond or quote this tweet saying something like "I would love to buy this on a shirt." I think you can figure out what happens next when they steal this image for shirts. pic.twitter.com/0ImFSPQfrM

We did it. We achieved something special. Tell your grandchildren that you were THERE when this happened.

Gonna mute this tweet because I'm getting WAY too many notifications, but thank you 🙏 pic.twitter.com/bkStdwOmve

Let's get this on a shirt too what the heck pic.twitter.com/VYOKWBl3Mn

hey guys! please tell me if you'd like to see this design on a tshirt :) pic.twitter.com/633t4bojmb

I want to play too. Wouldn’t this make an AMAZING T-SHIRT? 😍 I want it on a tote!! pic.twitter.com/NwDCPfTqAC

Several of the companies caught on and started taking the offending t-shirts down, but that’s the trouble with bots, they keep going and put the same potentially lawsuit-worthy designs back up again and again—enabled by the artists who aren’t going to let this end any time soon.

Oooh man, the website deleted the shirt (I wonder why…)

But I really REALLY love this artwork as shirt, wouldn't it be amazing if we can buy this as a shirt or mug? 🥰 pic.twitter.com/GAmheljoT8

now this is a twitter trend i can get behind pic.twitter.com/tmC8tChWnp

Nana’a design has even become the top SEO result for Toucan Style, one of the worst offenders of automated art theft.

Ironically, several of the artists behind this have actually started selling their designs though other, more legitimate print-on-demand websites like Redbubble, which generally defend creators copyright with a high degree of success.

Some of you have asked me to offer this cat on an actual shirt, so here you go! Hahahttps://t.co/OPb2BVNNhN

okay fine I caved, I am a horrible person with very little moneyhttps://t.co/N1cKrgoIJe pic.twitter.com/RPaV6xVsKr

Nana suggested setting up a hashtag to direct people to the original of the stolen designs so they can buy them from the actual artist who created them.

And if you actually do want a piece of artwork on a T-shirt, Twitter user @nakanodrawing helpfully made an adorable little GIF of her butthole cat popping the (please make me a T-shirt) question because the bots haven’t figured out how to track text in images. Yet.

So since these art-stealing bots are tracking your text and not reply images, I made this for you guys!

If you want something from ANY creative made into a shirt, you can use this image to tell the artist you want to buy it. So you don't need to type it out ❤️ pic.twitter.com/E9Mn2GILcb

The Daily Dot has reached out to several of the offending companies and will update if they respond.