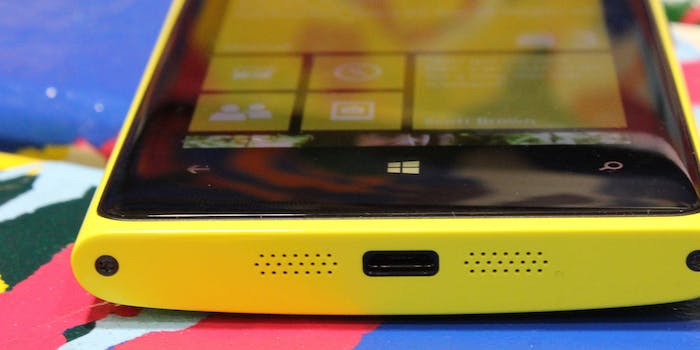 Companies do battle over a disillusioned customer.

Richard Wygand, a.k.a. ghostlyrich, made something of a stir in the technology world when he produced evidence that his Samsung Galaxy S4 smartphone, still under warranty, had seriously malfunctioned, melting from the inside out while charging overnight. Samsung went ahead and botched their response to the incident by trying to squelch Wygand’s YouTube video, making the problem 10 times worse—and now rival Nokia has swooped in to pick their carcass clean.

.@ghostlyrich we want to help you out. Let me send you a Nokia Lumia so you can experience how customer service should *really* work. -Jason

Wygand is still working out which Lumia model he’d be getting and whether he’d have to change his carrier, but he may want to do a little more research before committing to the product: the web is rife with reports of Lumias overheating, and as with the Galaxy S4, it appears they can spontaneously burn up when plugged in. According to customer Agnibh Mudi, whose phone was destroyed in this fashion two months after he bought it, Nokia wasn’t much more helpful than Samsung, insisting that such damage wasn’t covered by his warranty.

Nokia isn’t alone in looking to score brand points online. There are rumors that Samsung has long infiltrated message boards, particularly the subreddit r/technology, for astroturfing purposes. With an audience of millions, the company has a significant interest in tamping down the PR disasters that tend to receive a lot of attention there.

The Daily Dot’s original article about the Galaxy S4 drama, for example, was the top story on /r/technology until it was removed by moderators, we learned in an email tip. “So mods, why’d this post get taken down?” wrote one suspicious redditor, later amending their statement: “Oh look, it’s back up. Fancy that.”

In a thread from last year about the USSD code that could be used to factory-reset a Galaxy S3, we found this comment: “Where are the 3000 comments on how terrible samsung is oh wait. Selective bandwagon by r/technology.” A thread about how easy it is to wipe a Galaxy S2 received similarly scrutiny: “Why isn’t this all over the front page and everyone out with their pitchforks?” someone asked. “Because it’s being deleted by the mods?” came the reply. “This thread had nearly 300 upvotes, but is now nowhere to be seen.”

A third poster then provided links to other tech sites where Samsung operatives had been outed for shilling under the guise of disinterested consumers—they so effusively praised the Galaxy features while trashing the competition that the marketing agenda behind the posts became impossible to ignore. The company was fined for fake reviews in Taiwanese forums and even wanted to gag an actor who took to Reddit to complain of his experience filming a god-awful commercial for their 840 EVO solid state drive.

Yes, it seems that every time Samsung wants to claw their way out of a bad situation—and even when their hyperbolic street-team propaganda is wholly unnecessary—they find a way to dig deeper into the Internet’s inexhaustible supply of mucky resentment. That’s one way to get your name out there, I guess, though one gets the feeling that P.T. Barnum needs an update: there is such a thing as bad publicity, and these days it’s typically followed by worse.