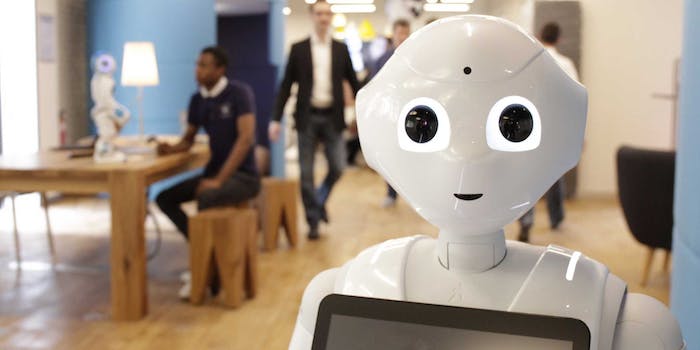 Sorry, you are not allowed to have sex with this robot

If you do anything indecent with Pepper, you'll violate the terms of service.

Aldebaran Robotics is the first company to take a stand against having sex with robots—or, at least, its robot.

Pepper, Aldebaran’s cute robot, is designed to operate alongside humans and recognize their displays of emotion, responding appropriately to crying and laughter. It’s a vibrant example of robot-human interaction, an idea from robotics academia that has far-reaching implications and could help rehabilitate children with autism.

Aldebaran Robotics created Pepper for SoftBank Mobile, one of the largest mobile phone providers in Japan. The bots are already at work greeting customers in SoftBank stores, and Aldebaran made them available to the public, selling out of 1,000 units within one minute. Each one went for £1,300 ($1980 U.S.), followed by £250 ($380 U.S.) in monthly rent.

Despite presenting itself as an emotionally intelligent marriage of hardware and software, there’s a clear line to how intimate users are allowed to be with Pepper. If you try to have sex with the robot (or program it to do anything indecent at all), you’ll be in violation of the robot’s terms of service. Wired translates the relevant portion of the robot’s Japanese user agreement as banning “acts for the purpose of sexual or indecent behavior.”

It might seem an unnecessarily specific caveat for the product, but Pepper owners are already testing the boundaries. There aren’t any reports extreme sexual behavior yet, but the Daily Mail reports that one female developer already “reprogrammed the touchscreen hanging from its neck to give Pepper ‘virtual breasts’ which makes it shake its hips and moan when touched.”

Purpose-built robots with the requisite anatomy for sexual intercourse are real, and they’re here today for men and women alike. A company called TrueCompanion is perhaps leading the way in designing realistic humanoid robots for sex. Aldebaran Robotics didn’t respond to the Daily Dot’s request for comment by press time, but this no-naughty-behavior clause echoes sentiments recently put forward by the Campaign Against Sex Robots, an effort spearheaded by Professor Kathleen Richardson of De Montfort University. She argues that sex robots demean human relationship so severely as to be a sociological threat.

“Many objects carry warnings about how they should be used by humans. ‘Do not insert into the body,’ for example,” Richardson told the Daily Dot via email. “It might also be dangerous to engage a robotic machine in an intimate way for humans with possible electrical danger issues that are not yet known.”

Richardson applauded the effort by SoftBank. “It seems like good sensible advice to the users.”