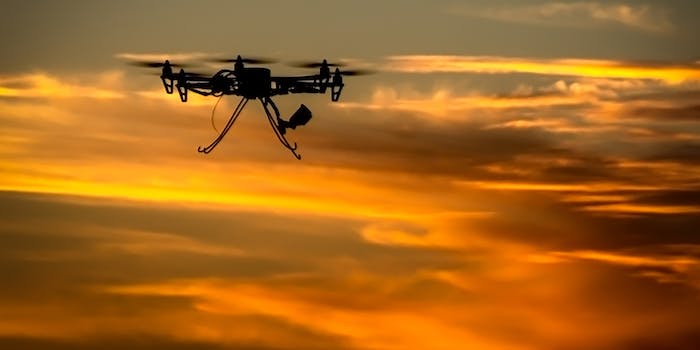 When drones are outlawed, only outlaws will fly drones.

It is an incontrovertible fact that flying a drone is a lot of fun.

At the same time, as a remote controlled vehicle that anyone with access to a few hundred dollars and a nearby Radio Shack can fly around without a license—no matter how drunk or irresponsible they are—drones are also kind of dangerous.

An Australian triathlete was hospitalized after being knocked in the head with a drone that was filming a race she was running, and a teenager in the U.K. was fatally decapitated when a drone he was piloting went out of control. In the past few weeks, an Amazon employee slammed a drone into Seattle’s Space Needle and a tourist at Yellowstone National Park crashed a drone into a famed hot spring, possibly damaging the natural wonder irreparably.

In the United States, the laws regarding drones are a confusing mish-mash of FAA guidelines, potentially unconstitutional state laws, and a deafening silence on the issue from Congress. While the commercial use of drones—along with when and where it’s acceptable to take pictures with them—is in flux, it is possible to answer the question of where it is and isn’t legal to fly them.

An interactive map, posted on the custom online mapping site Mapbox by data analyst Bobby Sudekum, details all of the places in the United States where it is and isn’t legal to fly drones. On the map, all of the places where drones are forbidden are indicated in red.

The map basically blocks off three different areas in which the flying of drones, even just for recreational purposes, is banned. Those areas are the zones surrounding major airports, U.S. military bases, and inside national parks.

As a result, much of the American Southwest is a sea of red splotches representing things like Death Valley National Park, Fort Irwin, Tonaph Test Range, and the Grand Canyon.

The most distinctive no-drone zone is actually a giant circle ensconcing the nation’s capitol in Washington, D.C.. 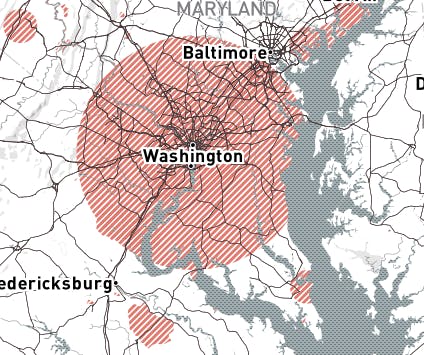 Following the 9/11 attacks, the government imposed a temporary ban on virtually all aircraft flying within an approximately 10-mile radius of Reagan National Airport, just outside of Washington. That temporary ban, which includes model aircraft like drones, has never been lifted, so D.C. residents have to leave the immediate area if they want to take their drones for a ride.

Under a set of guidelines established by the Federal Aviation Administration back in the ’80s, flying drones in all other areas is fine as long as the vehicle stays under 400 feet and doesn’t fly outside of the immediate line of sight of the operator.