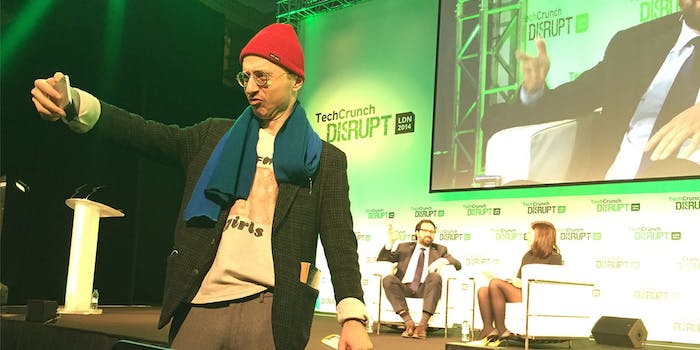 I was the most disruptive part of TechCrunch Disrupt 2014 London

The apps and startups didn’t disrupt much of anything. Nimrod Kamer, however, did.

I went to the TechCrunch Disrupt conference mostly to interrupt the show. The annual tech conference, held in London for the first time, plays host to a multitude of desperate entrepreneurs vying for attention while venture capitalists lord it over all the puny startups. Unfortunately, the featured apps didn’t disrupt much of anything.

I caught up with some startup heavyweights in London, including TechCrunch Editor at Large Mike Butcher, SoundCloud cofounder Eric Wahlforss, and once-bankrupted Danish investor Morten Lund—as well as the many startups and local aficionados trying to develop moral and personal fiber.

With my future job prospects at TechCrunch hovering around zilch, I had nothing to lose. I went to meet the best talent on show in “Startup Alley.”

Big brands were on full display.

And yet there was no answer to tech gentrification.

The King was present.

Some startups went to great pains to sell their products…

…While others just wanted to show off their threads.

At one point I took to the stage myself, almost getting thrown out for taking too many selfies during the talks. I call it a win, because I got a good tweet out of it.

This was my first ever TechCrunch Disrupt. It was intense. Hopefully next year they can celebrate some bigger tech celebs—because let’s be honest, U.K. Minister @edvaizey doesn’t really count. The tech elite predicted Shoreditch in East London would become the next Silicon Valley, and many say that building a startup here is the dream. It’s just a shame that hanging out here is actually a nightmare.

Regardless, I’m looking forward to attending this annually for the next 50 years. I’m just that #disruptive, I guess.