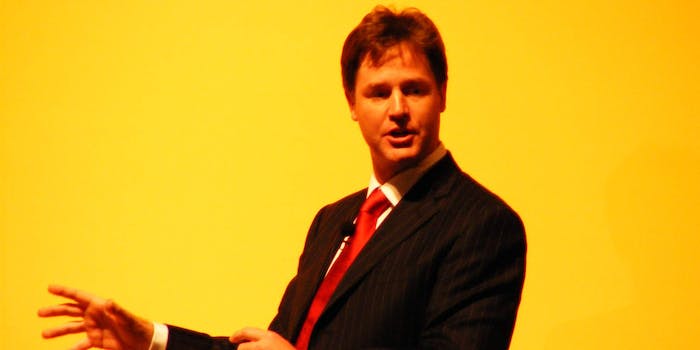 Teen boy asks U.K. deputy prime minister if he can have an annoying celebrity killed

Aren’t election campaigns wonderful? A chance for politicians to connect with everyday people, and for everyday people to discuss what they want from a future government. Like, for example, having an infamous TV personality put to death.

On the campaign trail for the U.K.’s upcoming general election, a teenage boy asked Deputy Prime Minister Nick Clegg if he could have Katie Hopkins killed. Hopkins is essentially Britain’s answer to Ann Coulter, a divisive TV personality who delights in making controversial comments and trolling the media. Here’s a typical example:

I rather admire the efficiency of Ebola. From a Malthusian and marketing perspective, it is beyond reproach.

Still, that’s not really an excuse to ask the deputy prime minister if he can have her put to death.

Obviously, Clegg said no to the boy’s request. But a few of the YouTube comments are already joking that if Clegg did promise to have Hopkins killed (or at least arrested), then he’d probably win more votes.

Photo via David Spender/Wikimedia (CC BY 2.0)