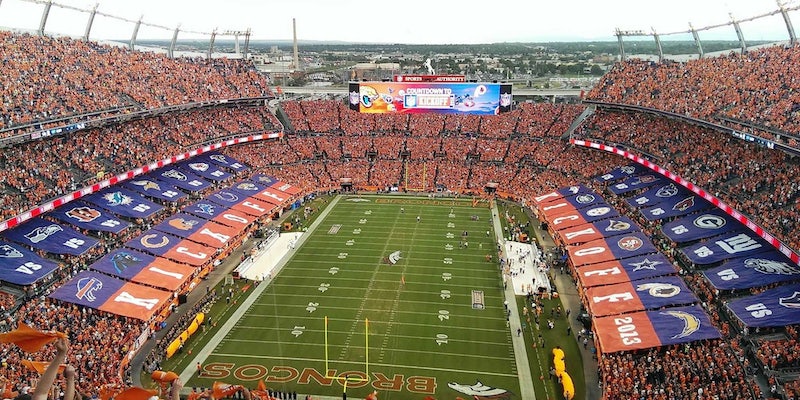 The NFL scores from above.

Are your ready for some football? The Federal Aviation Administration is. The agency has approved the National Football League‘s request to film its stadiums using drones—but there’s a catch.

The FAA last week granted an exemption for drone use to NFL Films, the league’s production branch, making it the first sports league to get permission to fly unmanned aerial vehicles.

But don’t take your eyes off the field on game day to look to the sky. The NFL only won the ability to film during off days and on the grounds of NFL practice facilities. There will be no drone filming in populated stadiums—at least for now.

There will also be no drone deliveries from the concession stands any time soon; the FAA gave permission only for data collection. You’ll still have to get up to grab your next round of beers.

The NFL applied for its exemption in May of this year, finally receiving permission last week before the start of the second week of the 2015-16 season.

The FAA’s granted the exemption on public-safety grounds, determining that drones were safer than manned aircraft carrying passengers and powered by flammable fuel. Basically, the odds of a Black Sunday or Hindenburg-style disaster are much lower with drones.

Even with the right to fly drones, the NFL will have to adhere to the FAA’s guidelines. The league is limited to flying 400 feet off the ground and cannot operate a vehicle heavier than 55 pounds. The NFL will fly DJI Phantom 1, DJI Phantom 2, and DJI Inspire 1 drones.

While the league now has the right to fly drones over multimillion-dollar stadiums across the United States, its fans do not. Of course, that hasn’t stopped rogue drones from making appearances over football stadiums and other venues.

FAA rules forbid drones from approaching within three miles of a stadium with a seating capacity of at least 30,000 people. The provision applies on game days, beginning one hour before games and ending one hour afterward.