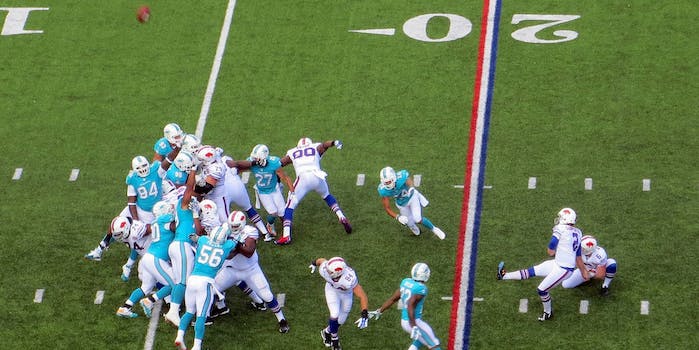 No word on if it will sense deflation.

Footballs will be filled with a bit more than just air this season. The NFL is planning to test “instrumented” game balls that will be equipped with data chips to record a variety of data during plays.

The plan, which was first reported by the Toronto Sun, is in the process of being finalized. Brian McCarthy, the vice president of communications for the NFL, told the Daily Dot the chips will be placed in every ball during the preseason. “Following the preseason test, the Competition Committee will review the results to determine how the balls performed along with the potential uses of the data collected,” he said.

If the test is successful, sensor-equipped balls may also be used during the regular season in a limited capacity; the data-collecting sensors would only be in balls used for field goals—referred to as K-balls—during Thursday night games.

The sensors in K-balls will gather a variety of data about each kick, including how far the ball travels and how close it comes to the uprights. According to the Toronto Sun, the information will help the league study potential changes to field goals, including narrowing the goal posts.

Last year, the league added an extra degree of difficulty to extra points by moving the kick to the 15-yard line instead of the 2-yard line. The move was successful, dropping the conversion rate on the kicks from 99.3 percent in 2014 to 94.2 percent in 2015. It marked the first year the extra point success rate dropped below 95 percent since 1979.

The data-tracking footballs mark an expansion to the league’s Next Gen Stats player tracking process that it launched several years ago. For the past two years, the NFL has inserted RFID chips in the shoulder pads of players to track speed, distance, and direction traveled by each player in real-time.

As of last year, that information was made available to fans through the NFL app for the Xbox One and Windows 10 machines. The app gave viewers the ability to view a player’s speed and the actual distance covered throughout the course of the game and alongside highlight clips.

Brian McCarthy confirmed to the Daily Dot that Zebra Technologies, the same company that provides the RFID chips, will be crafting the custom data chips that will be used in game balls.

Much like how the NFL has made the information from RFID chips available more broadly, the data gathered by the balls rigged with sensors could be used during broadcasts. According to McCarthy, the information may potentially be used on NFL.com and during in-game broadcasts including Thursday Night Football games during the 2016 regular season.

In regards to the test broadcast, Twitter told the Daily Dot at the time that the experience was early and incomplete and will see considerable improvements before launching for NFL games. The social platform could be eyeing access to information like the data gathered by sensors to add to its coverage and differentiate its broadcast from the simulcasts of the game that will be available on NBC, CBS, and NFL Network.