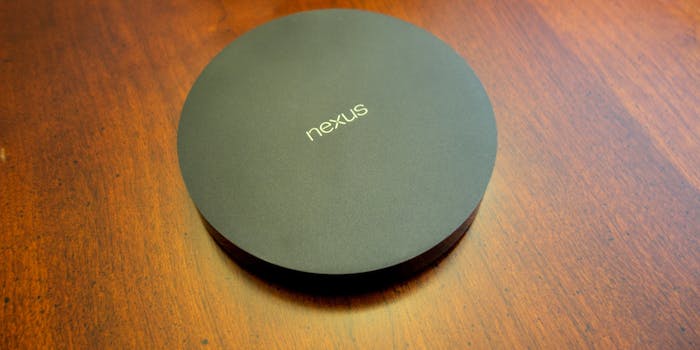 Google has built a worthy competitor to the Roku 3 and Apple TV.

The fight to fill a space on your entertainment center with a small black box is heating up. Google is the newest player in the set-top box industry, throwing its hat in the ring against the stalwarts that are the Roku, Apple TV, and Amazon Fire TV,

The Nexus Player, built by Asus, is Google’s latest attempt to make TV and Android work well together. Google has tried to crack TV many times—Google TV was a noticeable failure—but it has recently found success with the Chromecast. The $99 Nexus Player looks to build upon that success as the first product with Android TV to hit the market.

Breaking away from the aforementioned square black box design nearly every other device in the field has gone with, Google decided to go with a black circular casing for the Nexus Player, a welcome change of pace. This isn’t’ just a change for the sake of aesthetics—the band around the device is also the antenna, which pulls down 802.11ac Wi-Fi, the current fastest standard. The Nexus Player comes with a remote featuring the standard back, pause, and home buttons. It isn’t particularly great, but it gets the job done. The best feature of the remote is the built-in microphone for voice recognition, allowing you to search for things you want to watch. Google is undoubtedly the best when it comes to voice recognition, and the Nexus Player is no exception.

You can ask Google to search for your favorite movies (voice recognition doesn’t work in Netflix and Hulu, or any third-party apps for that matter), or to pull up Oscar-winning movies from 2007, and it will answer, usually flawlessly. You can even ask random queries including the current weather or sports scores, and Android TV will answer them for you. You can also download an app on your Android device to control the Nexus Player if you want to eschew the remote altogther.

The Nexus Player user interface is excellent—the best looking UI on any streaming box—with each app having its own distinct feel while still working with Android TV’s design language. It’s also incredibly fast, thanks to the quad-core Intel Atom processor. Navigating around the Nexus Player is a much more pleasant experience than using the archaic and slow UI on the Apple TV, and it just looks better than the Fire TV. YouTube on the Nexus Player is the best you’ll find on any set-top box. YouTube will show you trending videos and give you personalized recommendations of videos to watch, which will appear on the home screen.

Content is the biggest problem with the Nexus Player. Netflix and Hulu Plus are the flagship third-party apps, but it doesn’t go much further than that, and that’s a big issue for a streaming box these days.

You can Google Cast both HBO GO, WatchESPN, and some other apps from your mobile device to the Nexus Player, but if you’re paying $99 for a streaming device, it shouldn’t require another product to bring you the content you want to watch.

There is an optional Gamepad you can purchase for the Nexus Player, letting you play games on the device. The $39 controller is your basic bluetooth gaming pad—it works fine, but nothing to write home about—and with only 1GB of RAM, games aren’t particularly great. There was a noticeable lag in the menus of Asphalt 8: Airborne, but gameplay held up pretty well. If you’re hoping the Nexus Player could be a sufficient gaming console, it isn’t. It can handle some basic games well, but no one has cracked gaming on a set-top box, and the Nexus Player won’t be the first.

Google has built a worthy competitor to the Roku 3, Apple TV, and Amazon Fire TV. The Nexus Player is the most aesthetically pleasing streaming device available, both physically and in the user interface. It has mirroring technology in Google Cast that is only second to AirPlay on the Apple TV. The excellent voice search outpaces the voice search on the Fire TV.

The only glaring issue with the Nexus Player is content, and thankfully, that’s usually the easiest to address. If Google can get partners like CBS (Showtime Anytime), Disney (WatchESPN, WATCH Disney), and HBO (HBO GO and MAX GO) on board, it could challenge the Roku 3 for the best streaming box on the market.

But right now, the content isn’t there, and when it comes to set-top boxes, that is practically everything.

You can purchase the Nexus Player for $99, and the Gamepad for $39 on Google Play.

Photos via Micah Singleton and Google