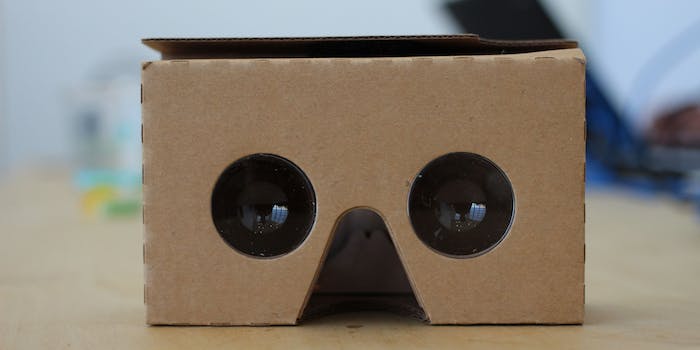 New York Times is going to give every subscriber Google Cardboard

All the news that's fit for virtual reality.

Sunday edition newspapers are usually filled with more pictures and color than the weekday editions, but the New York Times is taking that to the next level. The paper announced it will be shipping Google Cardboard virtual reality headset to its subscribers.

On the weekend of November 7, 2015, New York Times subscribers will find included with their paper a cardboard VR viewer so they can watch the Gray Lady’s foray into virtual reality.

The first project the Times will release that will make use of virtual reality will be a New York Times Magazine piece titled “The Displaced,” which will be centered around children who are uprooted by war. Times executive editor Dean Baquet said in a statement that the film will “shed light on one of the most dire humanitarian crises of our lifetime.”

Recipients of the cardboard viewing apparatus will plug their smartphones into the headset to watch what Baquet described as “the first critical, serious piece of journalism using virtual reality.”

The leap off the page and into the virtual realm comes in collaboration with Google. The pair plans to deliver more than a million of Google’s cardboard creation to the homes of Times subscribers.

Digital-only subscribers (the crowd more likely to be interested in VR, really) will have a chance to take advantage of the partnership as well. The Times said some digital readers will receive codes by email to redeem for a free viewer.

Without Cardboard in your actual inbox or a code in your email inbox, then the VR event is BYOH—bring your own headset. A variety of Google Cardboard headsets can be bought, or you can build one for yourself.

You’ll be able to watch the Times‘ first piece and its subsequent projects through the paper’s VR app, which will will launch for iOS and Android devices on November 5.