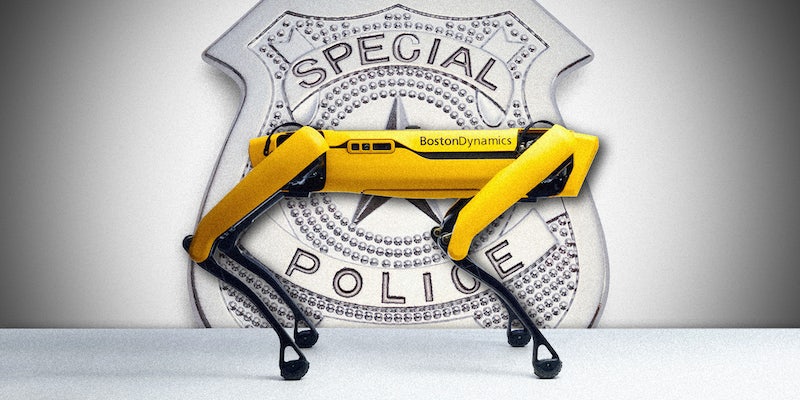 Police have been using the robots. A new bill wants to make sure they wouldn't be armed.

Councilman Ben Kallos will introduce the legislation today, which would amend the POST Act, a law that requires the NYPD to be more transparent about its surveillance tactics.

The legislation may be the first of its kind in the country, according to Wired.

The proposed legislation comes after the NYPD used a robotic dog built by Boston Dynamics, called “Digidog,” during a hostage situation in the Bronx last month. The robot has cameras, lights, and a communication system attached to it, according to the New York Times.

Video of the robot police dog, which isn’t armed, went viral, and Rep. Alexandria Ocasio-Cortez (D-N.Y.) criticized it as “robotic surveillance ground drones.” Other police departments in the country have used the robots in the past.

Kallos’ bill would make it so that any kind of autonomous robot used by police—like robot police dogs or drones—that interacts with the public in the future doesn’t have weaponry attached to it, his office said in a statement.

In the statement, Kallos said he wanted to make sure the city didn’t feel “like a Black Mirror episode.”

“The technology to arm robots already exists and in order to prevent anything like that from happening we have to act now, before the technology gets ahead of the laws,” Kallos said.

As Wired notes, Boston Dynamics prohibits attaching weapons as part of the company’s terms of service. But the potential for arming robot police dogs is not farfetched.

Last month, MSCHF, a New York-based company known for its outrageous publicity stunts and product drops, attached a paintball gun to a “Spot” robot made by Boston Dynamics and allowed people to virtually control it and shoot paintballs in an art gallery.