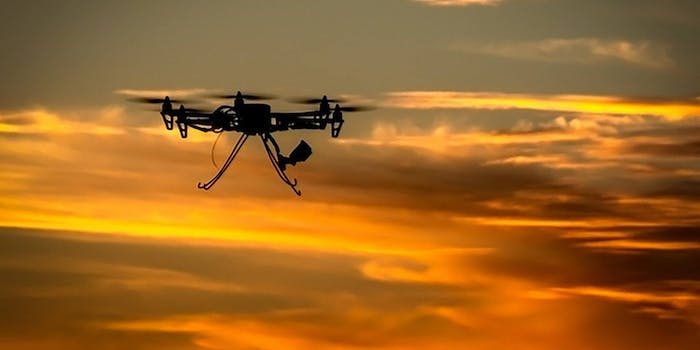 The new drone war is being waged over America

A surveillance state with unmanned aerial vehicles may be closer than you think.

If any technology titan would be excited about the rise of camera-armed civilian drones in the United States, you’d think it would be Eric Schmidt. The chairman of Google—the company that touts the democratization of technology and sends airplanes and cars (soon to be autonomous ones) around the world taking photographs of everything—once famously suggested that if you’re concerned about privacy, well, you’ve probably got something to hide. A few years ago, the company was accused of flying its own drones. And later this year Schmidt will oversee the release of Google Glass, with its drone-like surveillance capabilities (though he didn’t wear them on his trip to North Korea because, as he admitted to a tech conference this week, “I didn’t want to freak them out. They have a lot of guns.”)

But when it comes to drones, Schmidt is, ironically or not, part of a growing chorus that worries about a near future when virtually anyone can buy flying vehicles outfitted with cameras—and possibly, he points out, guns too. In January, he started talking about banning the flying things. His forthcoming book includes a lengthy section on them. And the Guardian published (and then removed) an interview with the Google boss in which he posited this scenario: “you’re having a dispute with your neighbor. How would you feel if your neighbor went over and bought a commercial observation drone that they can launch from their back yard? It just flies over your house all day. How would you feel about it?” You could probably cut the irony with a laser beam.

Still, Schmidt has tapped into the privacy zeitgeist. As Americans confront the CIA’s use of unmanned aerial vehicles overseas (a majority support them), the growing recognition of cheap, toy-like drones is giving rise to another battle in the skies over America. The question of how small remote controlled vehicles will be used at home—by police, scientists, photographers, and average citizens just having a good time—has touched a nerve in states like Texas. At the state capitol in Austin, concerns over privacy and safety have driven Lance Gooden, a Republican state representative, to propose a bill that would ban any drone use without a license or a police warrant. According to those familiar with the bill, Gooden was moved to action by concerns by one of his constitutents, a wealthy rancher worried about the prospect of his neighbors flying remote controlled cameras over his property.

This isn’t just a Lone Star state thing: now over 30 state legislatures across the US are considering similar laws. Some municipalities have already effectively banned drone use by the police; Charlottesville, Va., recently passed a resolution calling for a Congressional prohibition on the use of drone footage in federal or state courts. Drone advocates say that, with the right controls, the machines wouldn’t threaten Americans’ right to privacy; and they argue that, besides being ludicrously impractical, such bans could stifle innovation, and hamper emerging methods for search and rescue, law enforcement, and farming. They would also hurt a growing drone industry that might otherwise set up operations in other states or countries, at a time when the FAA is looking to designate eight sites around the country as drone test centers.

The fear of a drone ban is a very real one in Texas, where a number of schools and companies are already using drones for research and business. The FAA, which is charged with focusing on air safety and not privacy issues, has not issued regulations for commercial drone use, so drone “companies,” mostly film production outfits, are forced to fly under the radar if they fly at all. Police must also obtain permission from the FAA to fly small UAV, although documents obtained by MuckRock and the Electronic Frontier Foundation last year as part of their “Drone Census” showed that the Austin Police Dept. did not seek that approval when it sought to buy a drone earlier in the year. (The effort ran aground on high insurance costs and ulitimately the reservations of the Police Chief, who “had other concerns which were related to the concept.”)

Currently, the FAA only issues UAV licenses to private individuals doing aeronautical research and to government officials who can prove a need to use it for things like “law enforcement, firefighting, border patrol, disaster relief, search and rescue, military training, and other government operational missions.” Drone pilots are prohibited from flying over populated areas, and must often keep the aircraft within view. Larger government-flown UAV like the Predator appear to operate by other rules. The Dept. of Homeland Security operates most of its fleet of Predator drones over the borders of Texas, while the Air National Guard base in Ellington is responsible for flying many of the Air Force’s Predator missions over Afghanistan. There are also reports that DHS has been assisting local law enforcement agencies with Predators; FOIA requests by the Electronic Frontier Foundation over that usage have not yet been answered by the FAA.

By Alex Pasternack | Photo by eschipul/Flickr