Why hasn’t there been a new Couchsurfing?

Six years after its rapid decline, Couchsurfing is still hanging on, but it lacks the same sense of community.

Social networks and online platforms come and go. Before Facebook, there was Friendster, before Google, Altavista, and before Gmail, Hotmail. But the travel space is different. Before Couchsurfing, the largest and most active travel network ever, there wasn’t much—and six years after the network’s use collapse following user-backlash over its privatization, we’re still waiting for an adequate alternative.

“What was fairly unique about Couchsurfing is that it was more word-of-mouth growth rather than what happens nowadays,” says Prashant Lagisetti, the co-founder of the on-hiatus travel network Localoids. “It was far more organic.”

For those of us who experienced it, Couchsurfing in the 2000s was special. I joined the site in 2006, while on a trip around the world. I stayed with more than a dozen hosts in 10 countries. When I returned back to the U.S., I became an active host and then an organizer. Between 2006-2010, what I and many others consider the “peak” of Couchsurfing, barely a week went by when I didn’t host, surf, or organize an event. When I traveled, I met Couchsurfers in cities as diverse as Taipei, Taiwan; Cleveland, Toronto; Tokyo; and Kansas City, Missouri. It was a common, shared experience of a special time.

“Between 2009-2011, the site was huge,” reflects Jojo, a longtime Couchsurfer who no longer uses the site. “People and local groups were super active. My local city group was such that I would just post something like ‘Hey I’m free this evening what’s up?’ in the afternoon and be sure to have a blast with other couchsurfers, both locals and travelers, spontaneously.”

To us, Couchsurfing epitomized the potential of the internet: a platform, built by users who created a global social network through, essentially, word of mouth. It was a genuine sharing economy platform, with cultural exchanges—whether it be hosting travelers, surfing with guests, or organizing events—as its core function. Money played only a small role, and besides a confusing (and perhaps unethical) “verification” function as the only revenue source, the site relied on volunteers.

And yet, none of the well-funded and well-designed alternatives that surfaced in its wake have managed to take its place. In fact, none have grown much at all, reflecting not only the changes in how we travel but also in how we use and access the internet.

Couchsurfing did not invent hospitality exchange. It existed long before the internet existed and remains a key part of many travel experiences. It’s estimated that homestays account for 40 to 50 percent of all trips. Most of these are direct connections, via friends or family, though a few networks existed in the pre-Couchsurfing days, like Servas, which utilized a book full of pre-vetted members in place of online profiles.

Couchsurfing merely took hosting and staying with strangers online, bringing scale and, almost accidentally, creating a powerful travel social network. It was an early trailblazer, founded back when even Facebook was a little-known network. This was the internet before the giants, a desktop-based, push notification-free world.

In 2011, Couchsurfing was stolen from us. Much has been written about the selling of the site to venture capitalists, who proceeded to alter many of its core functions from their shiny, high-tech headquarters in San Francisco. For users, it was a betrayal, and while data is hard to find, due to Couchsurfing shutting down its stats pages, the general consensus is that the site has changed for the worse.

“Couchsurfing is dead to me, and I don’t expect anything good for it anymore,” said Jojo. “It could have become something truly amazing, in a Wikipedia way, but greed took over like many good ideas on the internet.”

The turmoil of Couchsurfing was also an opportunity. The travel space was hot, and dozens of both VC-backed and nonprofit startups aimed to replicate Couchsurfing’s success and become the Facebook to what they saw as a failed Friendster. There was Trampolinn, focused on reciprocity and attempting to gamify the exchange process through the use of points. The aforementioned Localoids fixated more on Couchsurfing’s cultural exchange aspect, bringing cooking, language lessons, and tours into the travel social space. Magpie aimed to build a Couchsurfing for women.

Don’t bother to search for any of those sites online. All three have folded or gone on hiatus. Other alternatives like Voyaj, Nightswapping, My Twin Place or Global Freeloaders either have negligible traffic, been sold, or turned into Airbnb clones. There are still alternatives, like Horizon, a hospitality platform focused on building smaller, trusted communities, or the non-profits Trustroots and BeWelcome, but their membership and usage are minuscule compared to Couchsurfing. Trustroots, for example, has only 27,000 members, as compared to Couchsurfing’s 4 million in 2010. None have been able to capture even a tiny piece of the user base that fled Couchsurfing, let alone the site’s magic.

The challenge is not finding travelers, but, as Couchsurfing learned the hard way, the business of hospitality exchange.

“How do you move all those homestays to a platform?” asks Drew Meyers, the founder of Horizon, a hospitality platform focused on building smaller, trusted communities. “The real problem that we need to solve is discovery, and enable more people to find a bigger number of trusted people who could potentially host them.”

Lagisetti, the Localoids co-founder, pinpoints another issue. “I haven’t seen any network that has that genuine community aspect to it,” he says. “All of them are about huge growth, or monetization straight away, or some other aspect that they are focusing on. That’s what I think it really comes down to.”

“Facebook took control of the ’net, so everybody just stopped using Couchsurfing when it came to community and only use it when traveling,” says Jojo.

Now, many of the thing that users used to do on Couchsurfing—organize events, meetup with travelers, or even hosting and surfing—can be done via Facebook. “Facebook is a major travel social network. There are a huge amount of travel groups,” says Mikael Korpela, a co-founder of Trustroots. “If you wanted to get hosted in Turkey, you wouldn’t use Couchsurfing, you would check out a group on Facebook called ‘Couchrail’ with 20,000 people—its just a community, and it works. …

“I always think I’m not in competition against Couchsurfing, but I’m competing against Facebook.”

There’s also the impact of Airbnb. When it started, Airbnb was focused on the same segment of travelers using sites like Couchsurfing, and its core message was all about connecting hosts and travelers.

“Their brand is still about community,” says Meyers, “but people in the industry know the reality: 70-80 percent of Airbnb’s business has nothing to do with community at all. It’s a vacation rental website, and that’s much easier to monetize.”

In fact, many Airbnb guests don’t even meet their hosts, using electronic codes or key exchanges services or even cafes to enter and leave homes. The platform mediates the communication from start to finish, helping ensure that payments and bookings aren’t made outside of the app, which would cost the site its service fees. It’s a reflection of the new mobile web, where we don’t choose our Uber drivers or swipe through profiles rendered to us via an algorithm. Even Facebook makes it tough to message strangers, putting those messages in a folder few users check.

Airbnb has been a success for one simple reason: It followed the money. Couchsurfing may have been a great social network in terms of connections, or social value, but it failed miserably, before and after it became a private corporation, in generating revenue.

“Couchsurfing at the beginning was not about money, and that was when it was most successful,” Lagisetti says. “Once they started to monetize and do things they said never would do, that’s when it all went to shit.”

The future of Couchsurfing

Couchsurfing is, amazingly, still there, though it’s hard to figure out how well it’s doing. The site acknowledges it has faced challenges but believes it has turned the corner.

“While Couchsurfing activity certainly dipped between the ‘heyday’ and today, we’ve made great strides in the past few years,” says Don Fultz, head of support and safety at Couchsurfing. “Since the site was rebuilt in 2014, we’ve focused on making consistent improvements across all areas of Couchsurfing and have seen an overwhelming response from the community.” (Crowdsurfing declined to share any data that would back up its claims.)

And some users, like Jason Griffing, a longtime Couchsurfer based in Connecticut, are still active and happy with the platform.

“The heart of it is still there,” Griffing says. “It’s a victim of its success, and I know people who say there are a lot of people just looking for a free place to stay. But for those of us who want that real Couchsurfing experience, it’s still there. You might have to look through more profiles to find people who understand that.”

Most longtime users do not agree with Griffing, and looking at the site itself paints a bleak picture. There are far fewer events in cities that used to, back in 2010, be incredibly active, such as Montreal, San Francisco, and Paris. City pages have little activity. Most users I spoke to said they receive a tiny fraction of couch requests compared to before, with no noticeable uptick since 2014. Perhaps everyone is on the mobile app, using the new hangouts feature? Maybe no one needs a host anymore, as they can just stay in an Airbnb, or with a friend of a friend via Facebook?

Maybe it’s not even actual travelers or experiences that Couchsurfing is aiming for anymore. 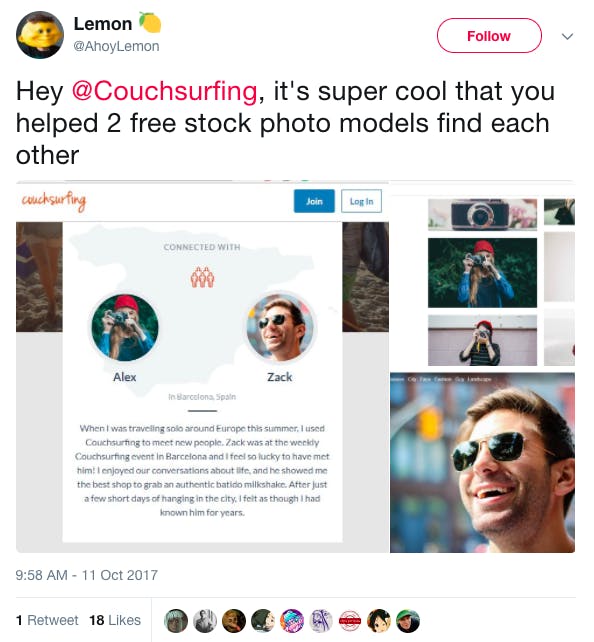 One thing is certain. Couchsurfing was a specific type of social network, build for the pre-mobile, user-not-algorithm-organized web, when cultural connections and idealism mattered more than today. Its growth defied all logic, as did its failure, taking place right when it finally got some financial influx. The reason it could never be monetized because it was never meant to. And that is, most likely, what has doomed most of its aspiring successors.

“If we would build old-school Couchsurfing today, it would not work,” Korpela says. “Because how people use tech is different, the generation that is traveling now is different, and young people have a different way to seeing the world and using platforms nowadays.”

Will another network come and recapture the magic of peak Couchsurfing? Lagisetti thinks so, believing that, had outside factors not come into play, Localoids could have become that network.

“I still do believe that there is space for a strong, deep community as Couchsurfing was, to exist again,” said Lagisetti. The reason all the alternatives have failed? They missed the point.

As for me? I don’t know. But after six years, I’m not holding my breath anymore. The truth is, I don’t need Couchsurfing anymore. The network I’ve built over the past decade means nearly anywhere I go, I have a friend, or a second-degree connection, willing to host me. But for those who weren’t lucky enough to experience the site at its peak, it’s a shame something like Couchsurfing isn’t there to open up doors.