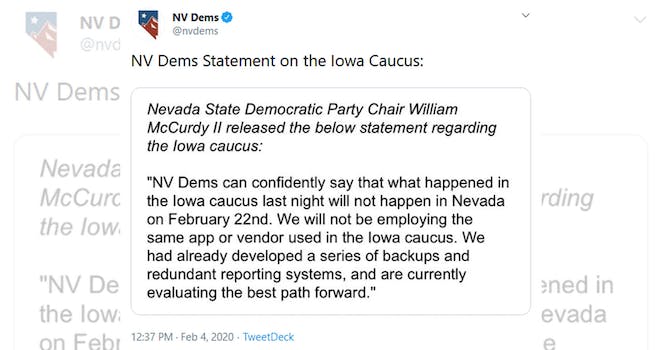 The state's party was reportedly expected to use the same app that had issues in Iowa.

The Nevada Democratic Party on Tuesday said it will not use the same ill-fated app that plagued the Iowa caucuses last night for its upcoming caucus later this month.

In a statement, Nevada State Democratic Party Chair William McCurdy II said: “what happened in the Iowa caucus last night will not happen in Nevada.”

“We will not be employing the same app or vendor used in the Iowa caucus,” McCurdy II said in the statement. “We had already developed a series of backups and redundant reporting systems, and are currently evaluating the best path forward.

CNN reports that Nevada was expected to use the same app during the state’s caucus on Feb. 22.

The Iowa Democratic Party on Tuesday said a “coding issue” led to a delay in counting the results of last night’s caucuses. The app was supposed to make it easier and faster to report the results.

Iowa Democratic Party Chair Troy Price said the app was recording data correctly, but was reporting out “partial data” due to a “coding issue” in the app’s reporting system.

After Iowa and Nevada, American Samoa, North Dakota, Wyoming, Guam, and the Virgin Islands have caucuses, according to the New York Times.