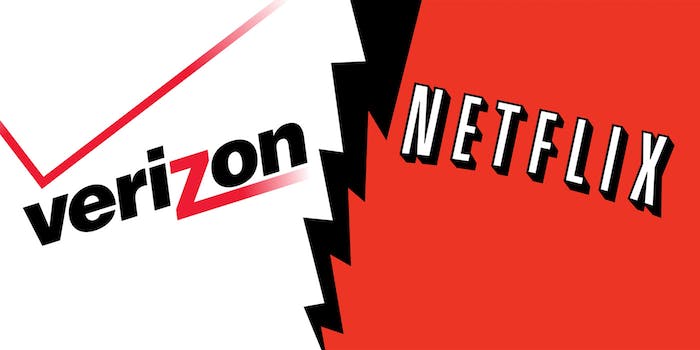 Last week, Verizon issued Netflix with a cease-and-desist demand—typically a precursor to any legal action—after Netflix began informing certain customers that their slow streaming speeds on their video-watching platform were because the “Verizon platform is crowded right now.” The ISP described this notice as “deceptive,” and said that “there is no basis for Netflix to assert that issues with respect to the playback of any particular video session are attributable solely to the Verizon network.” (The complete letter is embedded at the bottom of this article.)

Netflix has opted to ignore the cease-and-desist. A formal legal showdown could be imminent.

The five-day deadline that Verizon gave Netflix has since expired—and the video streaming service has made clear it’s not backing down. In a statement, Netflix General Counsel David Hyman said that Verizon’s “attempt to shift blame for [Netflix’s] customers’ experience on the Verizon network ‘squarely to Netflix itself’ disregards Verizon’s responsibility to provide its customers with the service it has provided them.”

The specific “notices” will be coming to an end soon. They are, the letter adds, part of a “transparency test” scheduled to end June 16. But Netflix is currently “evaluating rolling it out more broadly.”

Netflix and Verizon already have a fractious relationship. In February this year, claims were made that Verizon was deliberately throttling Netflix’s bandwidth, and the video platform paid Verizon for a direct connection a month ago after the latter refused to participate in the former’s “Open Connect Program”—something also addressed in Hyman’s response.

The program allows participating ISP’s to cache and store Netflix material on their own networks to improve speeds; instead, Hyman claims, Verizon has “allowed your network connection to Netflix to degrade until we agreed to pay for augmented interconnection. We brought the data right to your doorstep… and all you had to do was open your door.”

Whether the two companies—with a combined wealth of $225 billion—do come to legal blows remains to be seen. Ars Technica reached out to Verizon for comment and was told only that they “look forward to working with Netflix to improve our mutual customers’ enjoyment of Netflix.” Pressed on the prospect of legal action, the Verizon spokesperson said: “I’m not going to respond.”

Either way, it’s a further deterioration in relations between the two acrimonious technology giants. And as the battle over net neutrality continues to heat up, the lowest point in their relationship may still be yet to come.