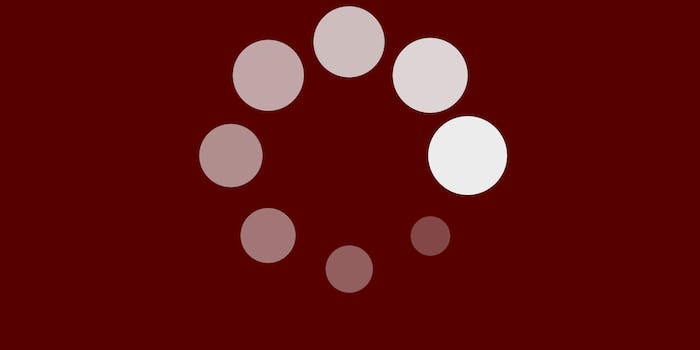 The realities of an Internet without net neutrality are about to become a bit more obvious.

In a move out of the anti-SOPA campaign playbook, Fight for the Future and other net neutrality activist groups have set up the Battle for the Net coalition, which plans to launch an “Internet slowdown day” later this month.

No actual traffic will be slowed down. Instead, participating sites will display embeddable modules that include a spinning “loading” symbol and information about contacting the Federal Communications Commission (FCC), the White House, and members of Congress.

“The Internet slowdown is a symbolic and creative action that empowers websites to show their users a message that gives them a sense of what the Internet could be like if we lost net neutrality,” Evan Greer, the campaign manager for Fight for the Future, told The Daily Dot.

The FCC is currently considering a net neutrality proposal that would allow broadband providers to offer Internet companies, like Netflix or Google, “fast lane” service to deliver content more quickly and at a higher quality than companies who do not opt into such an offering.

Critics say this plan would divide the Internet into two tiers—a “fast lane” and a “slow lane”—and cripple technology startups that cannot afford to compete with larger, wealthier companies.

The net neutrality movement has been saddled by an opaque name and the technical complexity of the issue. It’s often difficult for open Internet advocates who geek out about the topic to explain it in layman’s terms to their friends and family. Fight for the Future hopes that the omnipresent loading symbol can help them make their case.

Greer has seen the educational power of the loading symbol firsthand: “My four-year-old shakes his fist at the computer when the documentary he’s trying to watch doesn’t load and yells, ‘Comcast!’”

The Battle for the Net splash page says that “major websites and services are lined up to push hard on this.” Greer said that participants will be announced on September 2.

“We are taking a hint from the success of some of the movements of the past by allowing it to be a distributed action where anyone can participate,” she said.

Another tool in Battle for the Net’s promotional arsenal is this GIF, which pokes fun at slow loading bars to make a serious point about the possible consequences of corporate-friendly Internet fast lane policy.

The GIF points users to Stop The Slow Lane, one of Fight for the Future’s other net neutrality portals.

Greer acknowledges that the Internet slowdown day evokes comparisons to the January 18, 2012 Internet blackout that marked a turning point in the campaign against SOPA. But she stressed that Fight for the Future and other groups see this latest effort as part of a longer-term approach to the issue.

“We get a hundred phone calls a day, or emails, from people who say, ‘When’s the next SOPA blackout?’” Greer said. “The reality is that this a movement; that was a moment. What we need is a movement that’s in this for the long haul.”

Greer said she “couldn’t quantify” the amount of feedback she has received about the Internet slowdown effort, but added, “It’s Labor Day and I’m going to be laboring all day to respond to emails and communicate with the hundreds, possibly thousands, of different people and sites that have contacted us.”

Fight for the Future plans to post metrics at the end of the day on September 10—the FCC’s original deadline for net neutrality comments—listing how many comments and phone calls the effort generates. Their embeddable widgets will also let the group “generate a leaderboard of which sites or people are helping drive the most traffic,” according to Greer.

The FCC recently extended its deadline for comments on the agency’s net neutrality proposal to September 15, five days after Fight for the Future’s Internet slowdown day.

“There’s a lot of urgency in getting in a huge showing before this next comment deadline on September 15,” Greer said. “That doesn’t mean that this is the last moment or even necessarily the largest in this fight. This is going to push forward.”

In the meantime, prepare to see a lot of loading symbols when browsing the Internet on September 10. If Greer and her colleagues succeed, more people will begin to associate those annoying symbols with Internet fast lanes and other attacks on net neutrality.

“We want to show people what’s at stake if we lose net neutrality,” Greer said, “because it’s pretty difficult to explain it.”

Correction: An earlier version of this article used the incorrect pronouns for Evan Greer. She is female. We regret the error.