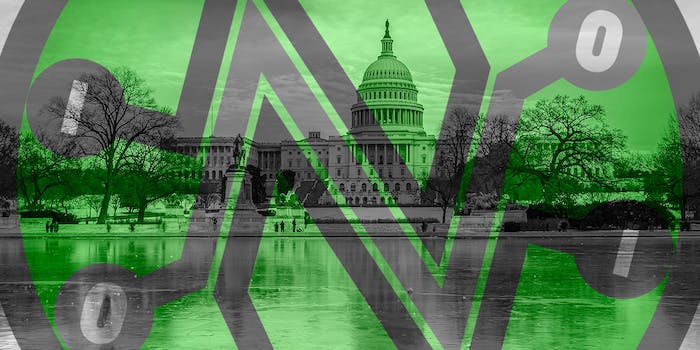 As holidays loom, open Internet activists give FCC a break

Even the FCC deserves a happy holiday.

Net neutrality activists are getting into the holiday spirit by shifting their attention away from the Federal Communication Commission (FCC), which earlier this year was bombarded by roughly 4 million public comments that mostly called for strong net neutrality rules.

“This morning,” net neutrality activist group Fight for the Future (FFTF) wrote, “[we] emailed the 30 FCC employees who have been receiving calls to inform them that they’d be stopping the calls for one week.”

“We know the people at the FCC are people too, so we’re happy to give them a week off,” Fight for the Future’s Jeff Lyon said. “Hundreds of calls a day is a lot to handle. But they need to do the right thing and stop delaying the process in ways that benefit cable companies and hurt the public.”

“The FCC should be accountable to the public, not the special interests of a select few companies,” FFTF cofounder Tiffiniy Cheng said. “We know that monopolies like Comcast and Verizon spend tens of millions of dollars lobbying and are constantly calling and visiting the FCC to make sure that their position is heard.”

The FCC should be accountable to the public, not the special interests of a select few companies

Fight for the Future helped mobilize more than 40,000 websites during an “Internet Slowdown” protest in September, driving more than 750,000 comments and no less than 300,000 phone calls to the FCC in a single day. They organized a live protest at the FCC’s offices as well, with the aim of making “net neutrality” a household term.

“If the FCC does not show clear signs it is moving quickly toward a vote on Title II net neutrality rules in January,” Fight for the Future cautioned, “they should expect even more pressure after the FCC meets December 11th.”

Until then, users are being directed from the CallTheFCC.com website to BattleForTheNet.com, where they can continue advocating for net neutrality by contacting their representatives, whom FFTF describe as “interfering on behalf of their cable company donors.”

Every day that the FCC delays #netneutrality rules is another day that Internet users' rights are denied. https://t.co/WCayzNI9HX

The public’s response to the FCC’s net neutrality proceedings this year has been far greater than in any other matter before the agency in its 80-year history. In the past two months alone, activists have driven nearly a thousand phone calls a day in support of a proposal to reclassify the American broadband infrastructure as a public utility under Title II of the Telecommunications Act. From the moment they arrive at work until the end of business each day, the agency’s top officials are inundated by the efforts of the open Internet’s most ardent defenders.

Conservative think tank FreedomWorks, which has accepted funding from major telecom companies in the past, boldly and falsely claimed that net neutrality “protects the Internet’s biggest companies at the expense of everyone else.”

It is, in fact, the nation’s biggest Internet service providers that stand to profit most from the death of net neutrality. Large ISPs regularly punish the same customers whose subscriptions generate hundreds of billions of dollars in annual revenue by reneging on crucial infrastructure projects in their quest for greater control.

While special interest groups work tirelessly to convolute the debate over net neutrality, groups like Fight for the Future have mostly carried on, undeterred by nonsensical opposing arguments like Texas Republican senator Ted Cruz (R-Tex.)’s claim that net neutrality is “Obamacare for the Internet.”

A Cruz spokesperson recently told the press that net neutrality would place the government “in charge of determining pricing, terms of service, and what products can be delivered. Sound like Obamacare much?”

Meaningless statements like these obscure the fact that the very freedoms Cruz purports to defend would be threatened by Internet “fast lanes.”

“If net neutrality isn’t maintained, then basically there’s multiple tiers of Internet for different people,” a net neutrality activist told the Daily Dot last month during a protest in Manhattan’s Union Square. The fight, he said, was “personal.” An aspiring entrepreneur, he dreamed of one day starting an online business.

“I’d like to have a fighting chance to do that.”

Photo via Tony Brooks/Flickr (CC BY 2.0) | Remix by Jason Reed