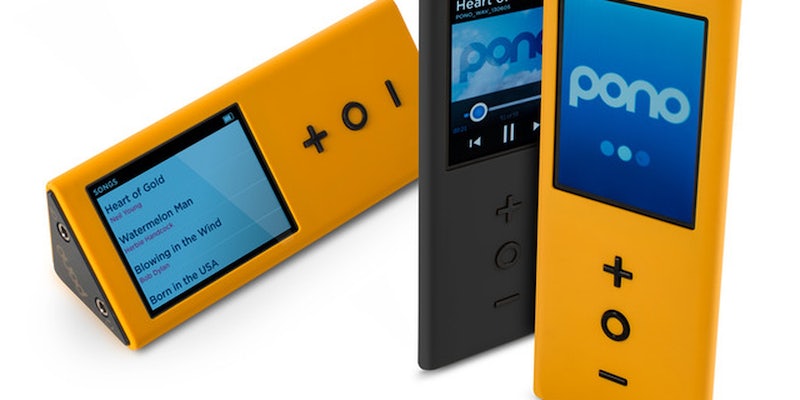 Is Neil Young’s new Pono music player for audiophiles only?

Could a generation of music fans raised on cold digital grain adopt the warm embrace of Pono?

Neil Young debuted a Kickstarter campaign to fund his new digital music player, Pono, and in less than 24 hours it reached its $800,000 goal. It’s still climbing over the $1 million mark, with more than a month left in the funding cycle.

Young has been vocal about the need for a high-quality music player for years, one that doesn’t compress music meant to be played in high definition into audio sludge. One that retrains our ears after years of listening to music through laptop speakers. According to the Kickstarter page, Young’s triangular, hand-held device attempts to access the audiophile’s emotional core as well:

“What righteous means to our founder Neil Young is honoring the artist’s intention, and the soul of music. That’s why he’s been on a quest, for a few years now, to revive the magic that has been squeezed out of digital music. In the process of making music more convenient–easier to download, and more portable–we have sacrificed the emotional impact that only higher quality music can deliver.

However, the world has changed in the last 10 years–technology has solved some of the underlying problems that forced that tradeoff. You no longer have to choose between quality and convenience when listening to music–you can have both. This is the fundamental idea behind PonoMusic.”

This crowdfunding feat tied in nicely with his SXSW speech yesterday evening, during which he discussed how the mp3 ruined the quality of digital music, and his frustration at seeing other forms of technology improved upon throughout the last decade, while music tech has remained stagnant. Pono will offer studio-quality music in an online store much like iTunes, and his label, Warner Bros., will likely be investing. It has already started converting thousands of its albums into a Pono-compatible format.

Young recruited a nice stable of celebrity backers as well: Bruce Springsteen, Eddie Vedder, Patti Smith, and Rick Rubin all give glowing testimonials. “Just so I can sleep at night, I want to bring back Pono, I want to bring back real music,” Young says. The question is, does the casual music-listener agree, or is Pono for the audiophile only?

Pono will sell for $399 when it finally arrives on the market this fall, the same price as Cone, another music-playing device demoed at SXSW, which will attempt to “predict” what you want to hear and tailor suggestions to your tastes. Pono has been called the iPod killer, but it might not be that easy to get a generation to simply hand over their current devices of choice in exchange for vinyl-quality music.

And this is one thing Young lamented in his speech: That a generation of music fans raised on cold digital grain would never know the warm spiritual embrace of his generation’s music, which was meant to be listened to as albums, not disposable singles. Though his speech was more passion than pitch, he did offer a very Neil Young-ian promise of Pono’s quality, and how you will feel the music in your “soul.”