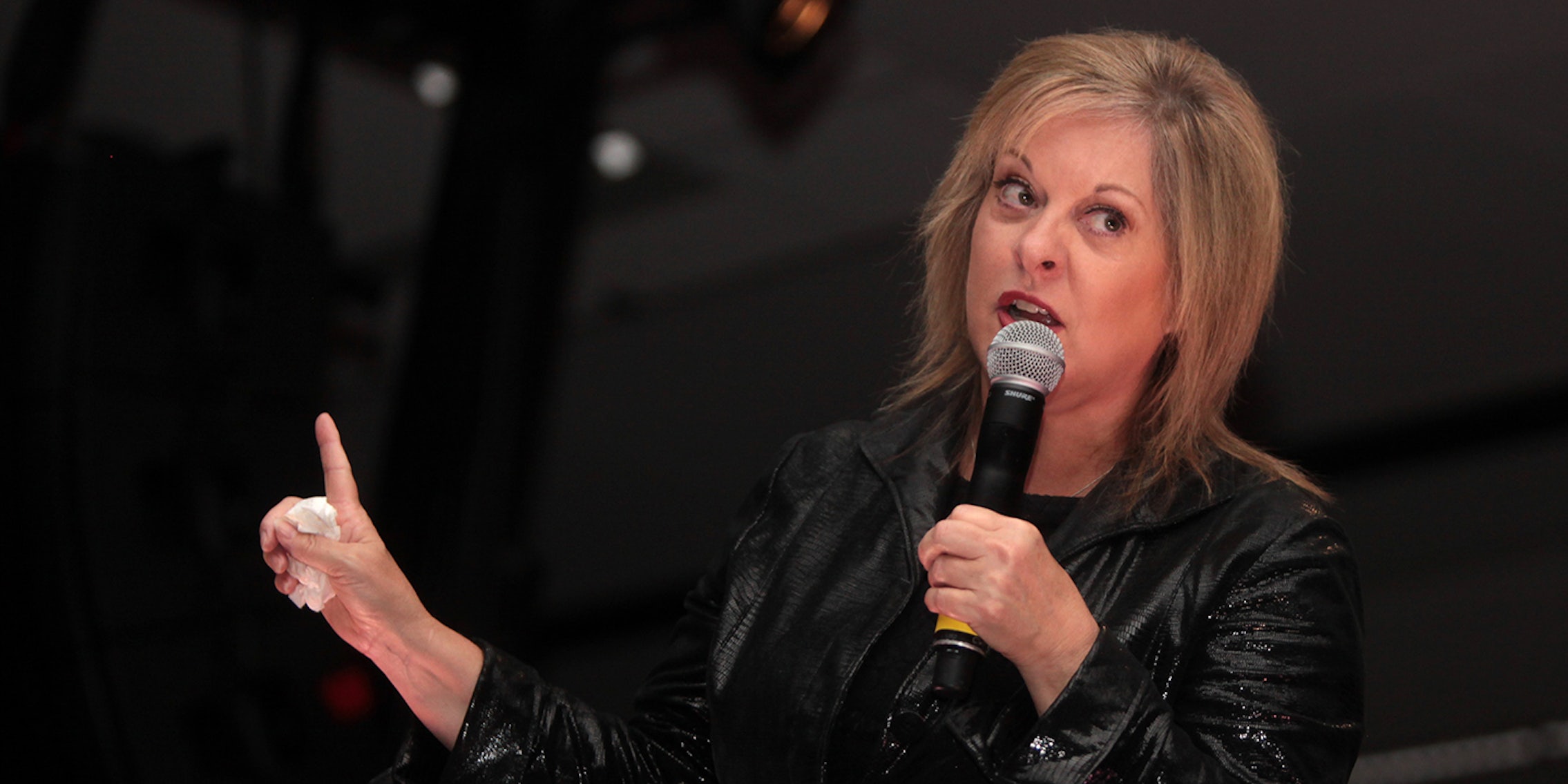 It was unclear whether she wants to criminalize pot or rap music.

It’s truly a wonder that I was able to write this article at all, as I was certain that, at some point during Nancy Grace’s interview with rapper 2 Chainz, my brain would, indeed, explode.

The HLN host kicked off her Tuesday night show with a couple of stories about young children who died or suffered due in part to their parent’s recreational marijuana use. (Disclosure: HLN is a video partner of the Daily Dot.) While these stories are certainly tragic, they served as shallow evidence to support Grace’s stance that marijuana should not be legalized—something she’s debated extensively (mainly with herself). But even more worrisome than her stance on this issue is how she chose to invite 2 Chainz onto her show to discuss it while attacking his character and being, frankly, racist.

She starts off by introducing 2 Chainz and noting that he is also known as “Tity Boi,” which is the best thing I’ve heard in 2015 thus far. She also adds that his real name is Tauheed Epps.

“I know your persona is different than your rap persona,” she says to him. Then she mentions his 4.0 GPA in college and the fact that he got a scholarship to earn his degree. In the land of Nancy Grace, the implication here is you should know better.

Throughout the entire interview, Grace unsuccessfully tries to discredit 2 Chainz’s view that marijuana should be legalized by pointing out his explicit rap lyrics and lifestyle. “I’ve seen video of you smoking a big fat doobie,” she says to him, while showing viewers the footage. The implication here is this guy’s opinion can’t be trusted, look at him. It’s unclear whether she wants to criminalize pot or rap music.

“It’s unclear whether she wants to criminalize pot or rap music.”

I’m not going to pretend that I ever considered 2 Chainz to be a scholar, but from the get-go he maintained impressive composure in the face of a shrieking Grace, as she tried to draw a connection between a few sets of irresponsible, pot-smoking parents, and the entire pot-smoking community. “I don’t think you can put an umbrella on the community you just named,” he tells her. “I just feel like you can’t use these particular stories to define everybody that has recreational use.”

Rebuttal: “I’m not defining everybody. So don’t put me in that pot and stew me.”

“I’m not sure if you know, but everybody can get their hands on pot right now, whether it’s legal or not,” 2 Chainz tells Grace. He then shares with her things that she should already knows but appears to be hearing for the first time, like the fact that keeping marijuana illegal contributes to overcrowding prisons and results in unnecessary arrests, which stain people’s public records and prevent from them getting things like loans. What he implies, but doesn’t state explicitly, is that this disproportionately affects minorities.

Over the course of the interview, Grace peppered in quotes from 2 Chainz lyrics and recited them back to him to undermine his completely valid opinion on marijuana legalization. “Smoking California weed with California hoes,” was one such lyric. Is that a nice thing to say? No. Does it have anything to do with the topic? No. She also goes to great pains to bring up his two daughters, implying that his stance is hurting them.

“What we talking about, Nancy? You everywhere,” he quips. Point: 2 Chainz.

After some more lyric recitation, attacks on his parenting skills, and input from other guests who joined the fray—Brad Lamm, an addiction specialist against legalization, and Norm Kent, an attorney in support of legalization—Grace brings us back to the point that 2 Chainz should know better.

“My stars, man, you graduated with a 4.0. You’re a millionaire,” Grace said. “You’re successful. At some point you have to look in the mirror and say this is wrong.”

Norm Kent, who earlier on said 2 Chainz was giving a voice to millions who shared the same view, got the final word.

“2 Chainz’s children are gonna grow up in a world where they use marijuana responsibly, where they don’t go to jail unjustly, where cannabis consumers are going to be lawfully protected, where government revenues are going be remarkably enhanced, and we’re all gonna be a lot better off. Marijuana smokers are coming out of the closet like gay people, and it’s about time they have.”

I can only hope that in the future Nancy Grace invites guests on for the sake of enhancing the conversation, and not to perpetuate a pernicious stereotype that has little to do with the subject at hand.

A girl can dream, right?