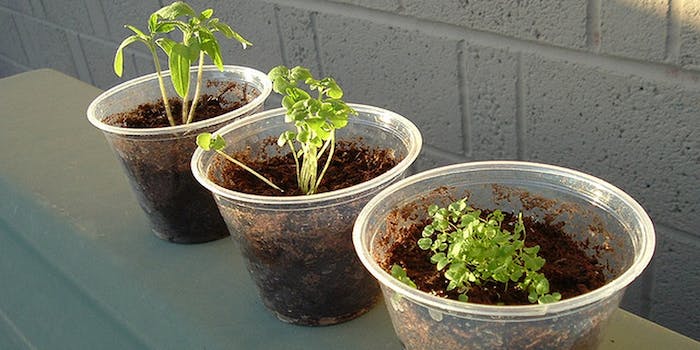 Your tweets may actually help this plant grow

As part of Mythbusters exhibit, a Denver museum is running an experiment to see if conversation with a plant will encourage growth.

It isn’t nearly as dangerous as stopping a Civil War-era sword or as messy as the Diet Coke and Mentos experiment, but the Mythbusters latest investigation brings crowdsourcing to the team’s extensive dossier of busting or upholding urban legends.

As part of “Mythbusters: The Explosive Exhibition,” the Denver Museum of Nature and Science has set up an interactive experiment that you can participate in from your living room couch.

The museum is encouraging people to send messages to a plant via Twitter, which will then be read aloud to the plant. Another plant sits in a separate soundproof room with no encouragement from the outside world. The experiment is designed to determine if speaking to a plant can actually encourage growth.

The hashtag #talktoaplant is being used in the experiment and as users tweet messages they are read aloud by tweet-to-speech technology.

Despite the perfect opportunity for Internet trolling, most people have sent kind words to the growing seedling:

I love you plant! You are beautiful! I wish all plants could get sweet care. Thank you for growing. #talktoaplant http://t.co/SRTPFwNVq7

Mythbusters deemed it plausible in a past episode of the television show that talking to a plant increases growth. And 1997 research from South Korea’s National Institute of Agricultural Biotechnology found that two genes involved in a plant’s response to light are turned on by music at a certain decibel.

While it is only the fourth day of the experiment and still probably too early to draw a conclusion, the plant being read tweets from around the world is an inch taller and has greener leaves than the other plant.

You can view real-time messages and keep up with both of the plant’s progress through the museum’s interactive website.