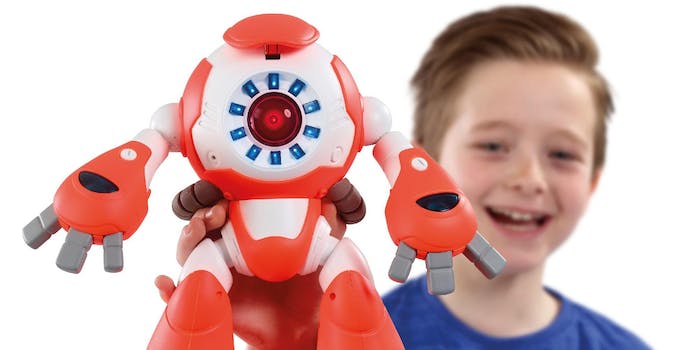 Maybe tell Santa to skip these ones.

Not even your children appear to be safe from the looming threat of the Internet of Things.

A handful of digital privacy, consumer, and children advocacy groups—The Electronic Privacy Information Center, The Campaign for a Commercial Free Childhood, The Center for Digital Democracy, and Consumers Union—have filed a complaint with the Federal Trade Commission against Genesis Toys and Nuance Communications alleging that the My Friend Cayla doll and the I-Que Intelligent Robot toy—made by Genesis—wrongfully collects data from children and sends it to Nuance Communications, a speech-recognition company that made the toy’s accompanying app.

This, according to the watchdog groups, is in direct violation of the Children’s Online Privacy Protection Act (COPPA), a law which specifically outlines how and what data companies can collect from children.

“When companies collect personal information from children through the internet, they incur serious legal obligations to protect children’s privacy,” reads a statement issued by the Center for Digital Democracy. “COPPA reflects a general understanding that the collection and use of information about young children should be treated with care and avoided when possible.”

The advocacy organizations also allege that the toys are easily hackable and could be used to surveil your children. My Friend Cayla and I-Que both use an unsecured Bluetooth connection to pair with mobile devices, meaning anyone with a smartphone or tablet could connect to the toy.

But wait, it gets worse.

“Researchers discovered that by connecting one phone to the doll through the insecure Bluetooth connection and calling that phone with a second phone, they were able to both converse with and covertly listen to conversations collected through the My Friend Cayla and i-Que toys,” the FTC complaint reads.

A similar complaint was filed in Europe by the Norwegian Consumer Council, which produced this video explaining how problematic the toys are.

My Friend Cayla and I-Que join Hello Barbie, a Wi-Fi-enabled doll manufactured by Mattel, as toys that have received backlash over privacy and security concerns.

For their part, Nuance Communications has issued a statement via a blog post stating that they have done nothing wrong.

“Upon learning of the consumer advocacy groups’ concerns through media, we validated that we have adhered to our policy with respect to the voice data collected through the toys referred to in the complaint,” said company spokesperson Richard Mack.