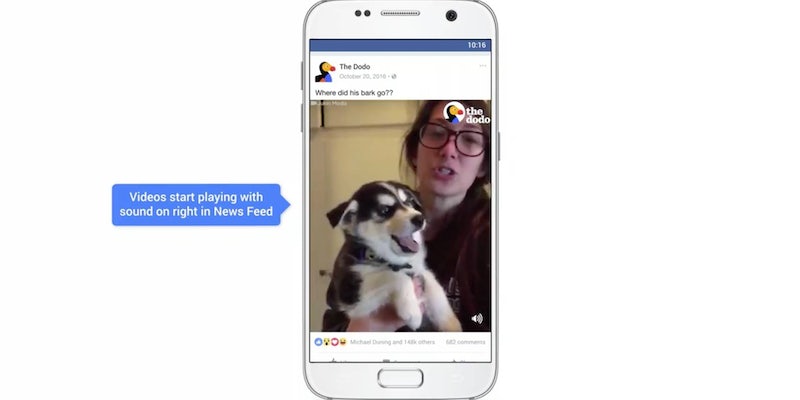 How to make Facebook videos stop shouting at you

How can you discreetly scroll through Facebook if your phone is blasting video audio?

Facebook users love watching video—or at least that’s what the social network likes to tell us. So as a sort-of Valentine’s Day gift, Facebook announced that it would be instituting a few changes to make video-watching even better.

In addition to a Facebook video app for Apple TV and Amazon Fire TV and a picture-in-picture feature, now when you’re scrolling through your feed, unless your phone is on mute, videos will automatically play with sound. If that sounds terrible rather than glorious, luckily, there’s an easy way to switch this setting off.

If you prefer your videos to default to playing in silence, head to Settings, then switch off “Videos in News Feed Start With Sound.” If you don’t like videos autoplaying altogether, you can fix that too. In Settings, instead of “On Mobile Data and Wi-Fi Connections” or “On Wi-Fi Connections Only,” select “Never Autoplay Videos.” With this, you’ll have full control over what videos you watch in your feed, and which you don’t.

If you’re browsing Facebook on your computer with headphones on, autoplaying audio may in fact be a nice feature. The sound isn’t going to bother anyone around you, and you’ve got the time to sit and enjoy 20 different montages of happy dogs. However, for the many times when you’re just hopping on the social network to see how many likes your last post garnered, autoplaying audio seems really unnecessary. At least now you don’t have to deal with it if you don’t want to.