How Arab comedians mock ISIS and Al-Qaeda on YouTube

This is bold, groundbreaking comedy—and the opposite of what you'd expect.

Want to know what Muslims really think about terrorist groups like Al Qaeda and the Islamic State?

Take a look at who they’re making fun of.

If you’ve somehow adopted the viewpoint that the Al Qaeda-affiliated attacks on French satirical newspaper Charlie Hebdo pitted western comedy against unlaughing Islamic values, allow this rebuttal. Not only is humor a staple across the Muslim world, but the Middle East openly makes fun of fundamentalist terrorist groups like Al Qaeda and the Islamic State (formerly known as ISIS), and shares the comedy online.

This humor is pitch-black at times, which shouldn’t be surprising. The overwhelming majority of victims of terrorism are from Muslim-majority countries, and after all, any joke about them is inherently about people in their region who can and do murder innocent men, women, and children over ideological differences. Common themes are the fear of being stopped at a checkpoint and finding humor in deadpan references to horrific acts.

So if you want to know what Muslims really think of terror groups, instead of asking them to condemn each and every extremist’s attack, consider thinking how they deal with it: by relentlessly mocking them.

From Watan Ala Watar, on Al-Falastiniya TV, Palestine

One of only two videos in this collection that’s subtitled, this one is fairly self-explanatory. A group of bumbling but bloodthirsty Islamic State fundamentalists run a checkpoint, looking for any excuse whatsoever to kill everyone who walks by. First, a guy forgets a prayer: shot offscreen. They ask the second a ridiculously tough question: how many times a single character appears in a nine-volume Sahih al-Bukhari. He knows he can’t answer, so he just volunteers to be shot.

When they realize the third passerby is Christian, two of the militants get too excited about who gets to kill him, arguing over who gets the “blessings” one gets for killing an infidel. To their dismay, he dies of a heart attack in front of them. “Wake up,” they say, “we want to get the blessings from you! Then you can die!”

This one also echoes the fear and helplessness of getting stopped by militants at a checkpoint, and yet again pokes fun at those who run those checkpoints by making them out to be idiots. Here, a Christian couple worry that they’ll be killed if they run into an Islamic State group. Sure enough, that’s who they run into, and the militant leader says that if they can’t prove they’re Muslims, they’ll shoot the man and take his wife for a concubine.

The husband, though, keeps his cool. When asked to prove his faith by citing a Quran, he begins spouting piously—but it’s a verse from the Bible, Matthew 10:16, which reads “I am sending you out like sheep among wolves. Therefore be as shrewd as snakes and as innocent as doves.”

As they drive away, his wife asks how he pulled that off. “Easy,” he says. “If they’re committing this much violence, they haven’t reach much of the Quran.”

This untitled short, played between longer sketches, plays out like a standard joke. Here, an everyday taxi driver stops and picks up a fundamentalist type by the side of the road. The driver speaks with him informally, but his passenger quickly tells him to speak in formal Fusha Arabic, as that’s how people spoke in the time of the Prophet Mohammad.

“Were taxis around in the Prophet’s time?” he asks.

“A thousand times no!” he replies.

So the cabbie pulls over and kicks out his rider. “Ride a camel,” he says. “Like they did in the Prophet’s time!”

4) Who Shall Butcher the Million?

From Iraqi sketch show State of Nonsense, which works as a meta-comedy about Islamic State members pitching their own TV show, comes a parody of Who Wants to Be A Millionaire called Who Will Butcher a Million? It’s a better pun in Arabic: the Iraqi version of the real show translates to Who Will Win the Million, and the Arabic words for “butcher” and “win” sound similar.

In the sketch, an unassuming host interviews an Islamic State-like member who says he’s only killed 200,000 infidels, but he wants reach a million. Skipping aside how answering trivia questions equals dead nonbelievers, the host lobs him softball questions. The second one, for instance, is who Islamic State most wants to destroy: America, Israel, Iraq, or the entire world. Like the real Millionaire, he’s given a few tools to make the question easier: Instead of 50/50, he chooses to “butcher two answers,” leaving the latter two. After mulling it over, the militant chooses to destroy the entire world, which turns out to be correct.

Stumped by the next question, the contestant selects to “ask the infidels” in the audience, vowing to blow up himself—and everyone else—if they give him the wrong answer.

For the final question, the contestant elects to “phone an Islamic State brother,” who was clearly sleeping before the call. It’s a silly question, anyway, since the host has asked where the Islamic State gets most of its income, and all four answers are different ways of saying oil. They settle on literally the word “oil”—an English cognate in Arabic—because it’s more widely understood internationally, and that’s how Islamic State can make the big money.

Playing along the same theme of putting bloodthirsty terrorists into a tame game-show setting, State of Nonsense also brings Islamic State’s Got Talent.

Similar to America’s or Britain’s or any other country’s take on the Got Talent franchise, here, three judges ask three successive candidates what they bring to the table if they were to join the Islamic State. The first contestant is the most absurd, bluntly saying “I can eat any human in five minutes.” That’s the joke—that pure barbarism.

The female judge—herself a parody of famous Lebanese singer and Arabs Got Talent judge Najwa Karam—falls over herself with a resounding “yes,” saying he’s the “new” talent she’s been looking for. She gets so excited, she urges the other judges to catch a human immediately so the contestant can eat him in front of their eyes. The two start bickering, each choosing the other to be eaten, but they eventually settle on just moving to the next candidate.

The second contestant claims he can detonate a suicide vest without dying. The third is a singer, who belts an autotuned pop sound about how IS has trained him to be a bloodthirsty executioner who’s cut off many heads, complete with awkward, hesitant dancing. 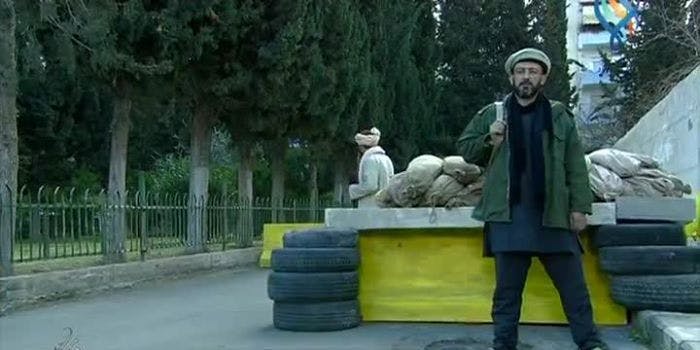 [Note: This video does not appear to be on YouTube, but you can watch it here.]

A long running comedy that’s broadcast across the Arab world, this sketch features well-known comedy actors Bassem Yakhour and Dima Kandalaft as a moderate, married husband and wife trying to escape Syria. Like the couple in (He) Hasn’t Read the Quaran, they too realize their way is blocked by an Islamic State-type fundamentalist group, whose leader is slapping a man for not sporting a beard. (His cries of being follicularly flawed fall on deaf ears.)

Enter Yakhour, with a fake beard, and Kandalaft walking submissively behind him, both wearing formal clothes. The joke here is that Yakhour gets so swept up in this fundamentalist persona, he takes it even further than the leader. First, he starts speaking in an exageratedly pious, Fusha (formal) Arabic, and agrees with the leader that the beardless man should be punished.

Upon hearing that beardless man being beaten offscreen, Kandalaft breaks her silence and asks why he’s being punished. Yakhour, staying in character, berates her, accusing her of wanting to learn to read, to listen to music, and to watch TV, and asks if anybody has a whip handy. The leader tries to calm Yakhour down, saying it’s not that big of a deal, so Yakhour goes off on him, too, slapping him and claiming it’s men like him who are keeping the Islamic State down. Kandalaft finally slaps him in the back and the two rush out.

Mocking one of those corny laundry commercials you’d see anywhere, this short sketch shows a woman upset that, when her murderous husband comes home with blood all over his tunic, she has a heck of a time getting those stains out! Thankfully, a stranger shows up with Da’ak brand detergent, which sounds close to “Daesh,” an Arabic acronym for the Islamic State, which in turn sounds like the verb that means “scrub.”

Da’ak gets your whites whiter and leaves them smelling like grenades, the pitchman says. At the end, he points at its three great selling points, highlighted from right to left at the bottom of the screen: “cleanliness,” “fragrance,” and “explosion.” Finally, everyone explodes and dies.

This is subtitled, so it shouldn’t be hard to understand. Again, Daesh is Arabic for the Islamic State. This faux infomercial, from Jordanian animators Kharabeesh, is selling Lego-like Islamic State member toys. Many “cannot be reprogrammed”—irrefutably set in their ways and unable to think on their own. They fit right at home on a shelf alongside Angry Birds and Barney plushies.

How do you create an Islamic State member? the video asks. You start with ignorance: They’ve all dropped out of school, so the emptier the Daesh’s brain is, the higher quality the final product. You feed it drugs and other toxic materials—recall reports that Islamic State leaders feed their soldiers cocaine to feel invincible. By the end of the process, the Daesh is “highly depressed and desperate” and then easy to brainwash. It’s less “ha-ha” funny and more “oof, that’s spot on” funny.

Illustration by Maks Karochkin/Flickr (CC BY 2.0)