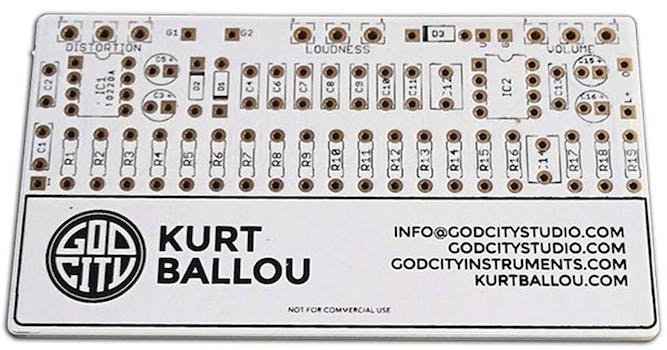 Kurt Ballou is one of the most respected producers is metal, and his business card lives up to that reputation.

Business cards are great for winning an occassional free lunch, but unfortunately too many wind up discarded and ignored. But what if you could flip your business cards into something valuable?

Kurt Ballou, music producer and guitarist for the celebrated metal band Converge, made his business card a distortion pedal.

The card is a printed circuit board that can be used to build a working distortion pedal Ballou calls the “Brutalist Jr.” With around $40-50 in parts, the ability to follow directions, and some welding skills you’ll have your own little death metal distortion pedal in no time.

But you won’t be able to order this little wonder: The only way to get the card is to see Ballou on the street or at a show.

Brutalist Jr is a mini version of a fully realized guitar pedal that Ballou will be releasing in 2017. Until then you’ll have to go to a metal show to get your hands on one.

Let's build something together. If you see me at a show or on the street or whatever (I won't ship these), ask for my business card PCB. It's free. If you have decent soldering skills, $40-50 to spend on parts, and can follow directions, it can be used to build an awesome distortion pedal! This circuit, called "Brutalist Jr." is a simplified, yet no less brutal version of "Brutalist," a pedal based on the Providence Stampede I'll be releasing in 2017 under the GCI moniker. Thank you to my friends at @dunwichamps and @snkpedals for helping develop this. Paint job on the prototype by @brutalsquid #gci #godcityinstruments #brutalist #brutalistjr #stampede #runitsastampede #diy #buildsomething #businesscard #pcb #businesscardpcb #solder #distortionpedal #diyordie