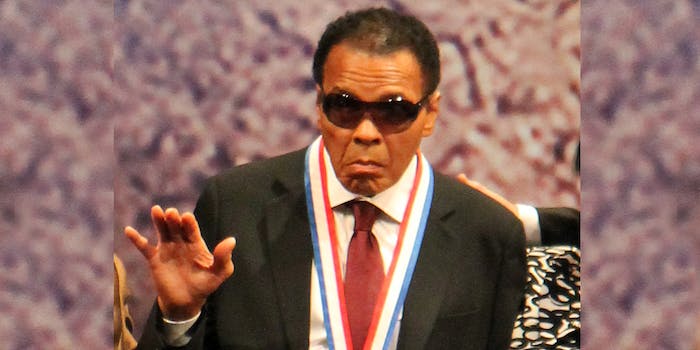 Muhammad Ali was undoubtedly one of the world’s best athletes.

At the age of 22 in 1964, the boxer defeated heavyweight champion Sonny Liston in a surprising upset that would propel him to superstardom. He went on to win the title of world heavyweight champion twice more in 1974 and 1979. The legend also won the gold medal in the light heavyweight division at the 1960 Rome Summer Olympics.

Ali passed away Friday night at 74 years old. While he became a legendary athlete from his boxing, Ali fought even larger battles outside of the ring. He faced discrimination simply for the color of his skin, after he converted to Islam in 1975, and for his outspoken views.

Ali refused to be drafted into the U.S. military to fight in the Vietnam War, citing his religious beliefs. His criticisms of the war also touched on issues of racial inequality. “I will not go 10,000 miles from here to help murder and kill another poor people simply to continue the domination of white slave masters over the darker people of the Earth,” Ali said.

He was later arrested and found guilty of draft evasion and stripped of his titles until 1971, when his conviction was overturned after appealing to the Supreme Court.

And while many may overlook that crucial part of the man and point simply to his boxing legacy, others are making sure that we don’t forget his activism and are pushing against the idea that he “transcended race.”

Muhammad Ali was unapologetically Black. He didn't "transcend race." What he did was even more important BECAUSE he was a Black man.

Muhammad Ali was unapologetically black, Muslim, and anti-Vietnam in a time when all three could have destroyed his career. Remarkable.

Muhammad Ali on everything being 'white' & recovering black consciousness. https://t.co/iTwL4P9ctq

I have always been humbled by Muhammad Ali's laser focus commitment to black freedom and justice. So much we can learn from his example.

While the world continues to the mourn the loss of such an icon, perhaps this video of him calling out a woman’s inability to recognize her white privilege will give you a good laugh.

Muhammad Ali DRAGGING this white woman by her roots – "don't compare yourself to no black man" https://t.co/ESEmE6dBE3