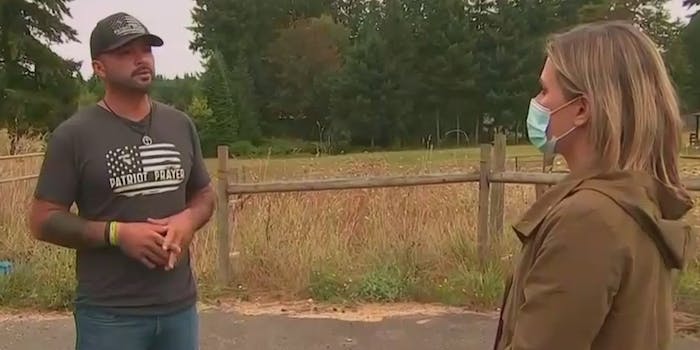 The network failed to challenge Joey Gibson on the far-right group's history.

MSNBC is facing backlash online after critics say it gave a softball interview to a leading member of Patriot Prayer.

Joey Gibson, founder of the far-right group, spoke with the network in Portland amid protests over police killings across the country.

Among the questions, Gibson was asked about the shooting death of one of his supporters on Saturday.

A man had been shot in the chest following a day of clashes between Black Lives Matter protesters and a caravan of Trump supporters, although police say it’s unclear whether the two incidents are linked.

When asked if he had any regrets, Gibson expressed concern for his friend’s death but ultimately blamed the media for its coverage of the incident.

“I don’t know what else we could have done differently,” Gibson said.

As noted by numerous people online, at no point during the interview did MSNBC challenge Gibson on his group’s history.

Twitter users pointed to several incidents involving the group, including one from 2018 in which Patriot Prayer was found to have stored a cache of weapons on top of a building prior to a protest in Portland.

Others argued that the network shouldn’t have given Gibson any air-time at all.

“MSNBC just interviewed Joey Gibson, referring to him as ‘Joe’ and didn’t mention how he’s the leader of a hate group,” @msbishop said. “DO BETTER!”

MSNBC has thus far not responded to complaints about its coverage.

Trump praised the caravan of his supporters that drove through the protest just hours before the shooting took place.

The New York Times also faced backlash for its coverage of Patriot Prayer, calling the group, which is prone to violence, a “local group that promotes Christianity and smaller government.”