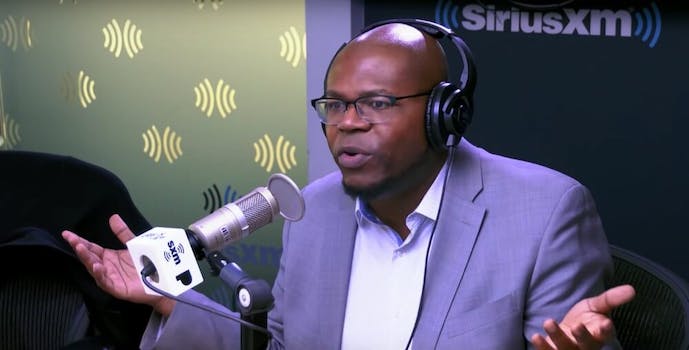 'The man cares nothing for intersectionality.'

On The Karen Hunter Show, Johnson made inflammatory comments about the women of color on Sanders’ campaign team, calling them “misfit Black girls.”

“I do find it fascinating that racist liberal whites seem to love them some Bernie Sanders, consistently, and always have a problem with any person of color who doesn’t want to follow with the orthodoxy of their ‘lord and savior’ Bernie Sanders,” Johnson said. “The man cares nothing for intersectionality, and I don’t care how many people from the island of misfit Black girls that you throw out to defend you on a regular basis.”

Briahna Gray Joy, Sanders’ national press secretary, responded to Johnson’s comments on Twitter and said she hopes “we can all encourage each other to be better.” She has used the hashtag “#MisfitBlackGirls” in multiple tweets about Sanders’ campaign.

Johnson is a professor, political analyst, and public speaker, according to his website. He has appeared as a commentator on MSNBC locally, nationally, and internationally.

The Daily Beast reports that pushback on his comments cost Johnson the opportunity to be on-air for MSNBC’s coverage of the Nevada caucuses last Saturday and that his absence has been noticeable.

“For the life of me I cannot understand why @DrJasonJohnson has apparently been sidelined by @MSNBC,” Roland Smith tweeted, which Karen Hunter, host of The Karen Hunter Show, retweeted.

Others criticized Johnson for his statement, calling it “appalling misogynoir.”

MSNBC did not immediately respond to the Daily Dot’s request for comment.