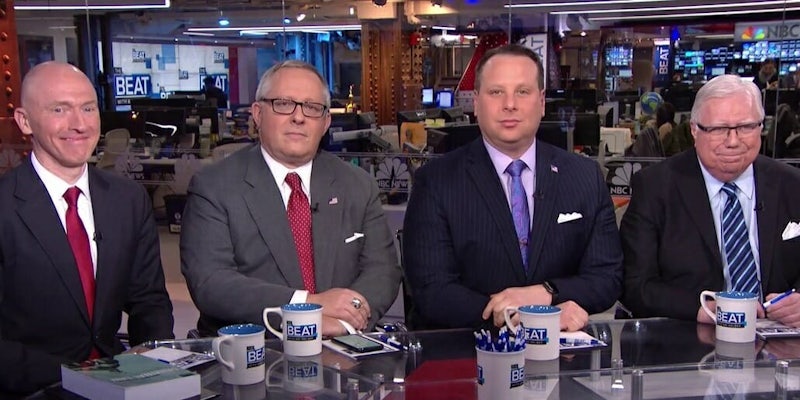 Online, the panel was more comical than informative and instantly spawned several memes.

When MSNBC managed to assemble four high-profile witnesses involved in special counsel Robert Mueller’s ongoing investigation for an interview panel on Wednesday, what might have been a fascinating exclusive descended into on-air chaos.

Carter Page, Michael Caputo, Sam Nunberg, and Jerome Corsi all have ties to President Donald Trump and, likewise, all have given testimony to federal investigators as part of special counsel Robert Mueller’s investigation into allegations of 2016 Trump campaign collusion with Russia.

The men sat down on The Beat with Ari Melber to discuss the Mueller investigation, its revelations, and indictments with the show’s host.

In response to questions, the four addressed the president’s claim that the whole investigation was a witch hunt. Nunberg and Page both described the investigation as professionally managed. With varying thoughts on the legitimacy of the probe, the common consensus seemed to be that Mueller had stretched

Caputo, Trump’s presidential campaign aide, also dismissed the president’s former attorney Michael Cohen as someone “doing whatever Mueller tells him to do.”

Debate got particularly hot, however, at the mention of Trump ally Roger Stone. Stone is known by all four men on the panel and has increasingly become the focus of the ongoing investigation, over his ties to WikiLeaks.

Both Nunberg and Corsi accused Stone of being a liar. In response, Caputo stepped in to defend his friend.

“I’ve known Roger 30 years, Dr. Corsi, and I’m not buying this George Washington routine of yours on this,” said Caputo.

“The fact of that matter is, the reason us three are in there is because of Stone!” replied Nunberg.

Online, the panel was more comical than informative and instantly spawned several memes.

we still doing that "infinity war is the most ambitious crossover event" thing pic.twitter.com/RTjJCrHCCQ

@AriMelber’s panel looks like the world’s worst episode of The Dating Game ever. #TheBeat

If you have a problem, if no one else can help, and if you can find them, and you want it screwed up so badly you later have to disavow any knowledge of them, maybe you can hire… pic.twitter.com/Svdkwdomnr

I think we can all agree that Boston is a better band than this https://t.co/GqUPbucOyR

Watch the bizarre interview in full below: