More than 3,000 conservative Facebook users have shared this parody card of President Obama. But who's the joke really on?

A joking Valentine’s Day card featuring a smiling President Obama has been shared by over 3,000 conservative Facebook users in just a few hours.

“Hope you like this Valentine’s Card, your grandchildren are paying for it,” it reads. The card’s signed at the bottom by MrConvervative.com.

Besides taking liberties with punctuation, the message raises baffling questions: Why would Obama send his constituents a badly Photoshopped Valentine’s card? And why would anyone’s grandchildren pay for it, since it’s free to share pictures on Facebook?

Further adding to the confusion is the photo’s popularity. MrConvervative.com is a relatively new site, with posts only going back to Jan. 11. Its content seems to be exclusively recycled and unattributed. Many of its images have long been forwarded around the Internet, such as this short, family-values-centered speech allegedly given by the CEO of Coca-Cola, which MrConservative simply reposted.

Another article from Monday about battleground states on the site is a blantant word-for-word reprint of an Los Angeles Times story published earlier that day. (MrConservative didn’t attribute or link to the LA Times for the story, but he did—apparently by accident—include the original author’s email signature at the bottom.)

That means any Facebook user can simply see the option to “Like” the idea of being “Conservative,” and inadvertently agree to MrConservative’s group.

Consequently, that group already has over 1,400,000 members. That huge number helps explain the varied comments under the Valentine’s photo. They range from Hilda Adame’s “Wouldn’t mind getting this card from a good looking man,” to Brent Cavazos’s “Remember, all this has to happen in order for the rapture to take place.” 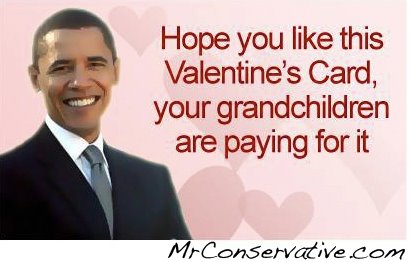