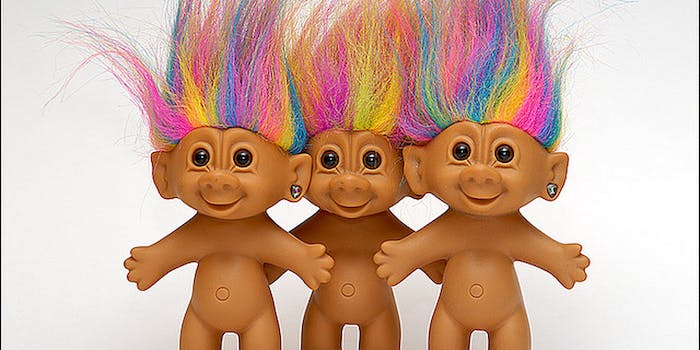 Patent troll sues U.S. for its right to patent troll

What's a patent troll to do when challenged by federal regulators? Sue, of course.

What’s a patent troll to do when challenged by federal regulators? Sue, of course.

MPHJ Technology has filed suit against the Federal Trade Commission, claiming that the agency’s efforts to intercede into MPHJ’s business practices violate the company’s constitutional rights. MPHJ Technology and other prominent so-called “patent trolls” face increasing legal backlash regarding their business practices, which involve using controversially obtained patents for the sole purpose of filing lawsuits against other companies and technology users.

MPHJ is a giant in the field of patent trolling. The firm has created a lucrative trade for itself by threatening litigation against thousands of U.S. companies that use scan-to-email technology. MPHJ claims the patent on this widely used computer function and has sent letters to some 16,000 businesses demanding royalty payments of roughly $1,000 per employee and threatening the cost of an expensive patent trial.

These actions have drawn the ire of numerous state and federal agencies. State attorneys general in Minnesota, New York, Nebraska, and Vermont have all taken steps to halt the company’s activities, according to the Register. Tactics have ranged from cease-and-desist letters to actual lawsuits. The FTC itself had warned MPHJ that federal legal action could be on the horizon. The suit filed by MPHJ this week seems to have been a preemptive strike designed to take the fight to the commission.

In documents filed with the U.S. District Court of in the Western District of Texas, MPHJ argues that the FTC has overstepped its jurisdiction in pursuing legal action against the patent firm. They say the commission has no authority since MPHJ wasn’t trying to sell anything to the companies it threatened.

“The patent enforcement activity of MPHJ, its licensees, agents and counsel upon which the FTC Defendants have based their threat to bring suit do not constitute acts or practices in or affecting commerce,” the lawsuit reads.

The firm also asserts its right to First Amendment protections in mailing out the letters and accuses the FTC of violating the federal government’s separation of powers doctrine by not waiting for a judicial investigation to conclude before pursuing legal action against MPHJ.

MPHJ’s legal action comes after months of mounting legal and regulatory pressure that began when the Vermont attorney general filed a lawsuit against the company last May. Other states quickly followed, objecting to the way MPHJ’s founder, Texas Attorney Jay Mac Rust, targeted mostly small businesses with less than 100 employees – including a Vermont nonprofit organization serving adults with developmental disabilities. According to ArsTechnica, the FTC was on the verge of suing MPHJ on the basis of section five of the FTC Act, which prohibits deceptive trade practices.

But if past litigation is any indicator, MPHJ may have a tough time proving its case. Earlier this week, New York State Attorney General Eric Schneiderman announced a settlement with the patent firm, requiring MPHJ to refund all money collected from New York businesses and barring them from further contact with previously targeted companies.

“So-called ‘patent trolls’ exploit loopholes in the patent system and have become a scourge on the business community,” Schneiderman said in a written statement. “They drain critical resources from small and medium-sized businesses that would otherwise be available for reinvestment and job creation, which are sorely needed across New York. State law enforcement can’t cure all the ills of the federal patent system, but the guidelines established in today’s settlement will put an end to some of the most abusive tactics by placing the industry on notice that these deceptive practices will not be tolerated in New York.”

The massive number of businesses targeted by MPHJ makes the firm one of the largest and most notorious patent trolls in the country, but they are far from the only one. Taking advantage of a patent system that many argue has failed to keep up with the fluidity of digital culture, patent trolls make money solely through filing lawsuits and forcing companies into lucrative licensing agreements. These patent-holders have no interest in using the patents to build their own products, buying up patents on devices and technology they did not create.

In Congress, lawmakers have taken several stabs at passing anti-patent-troll legislation that would, among other things, force patent trolls to cover defendants’ legal costs in frivolous lawsuits. The high cost companies face to defend themselves from patent lawsuits are what allow the patent troll business model to exist. Most small companies, when faced with a costly lawsuit, will roll over and agree to a licensing agreement.

The latest anti-patent-troll bill, the Innovation Act, passed the House of Representatives last month with strong bipartisan support. It now awaits action in the Senate.