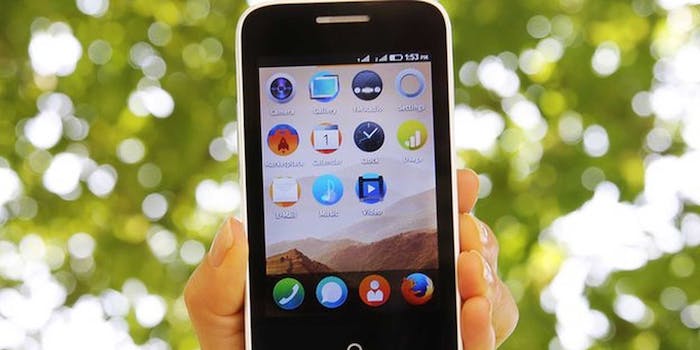 Mozilla will sell $25 smartphones in India

That's a fraction of the cost your paid for your refurbished iPhone 5S.

Mozilla hopes to start selling smartphone handsets in India for only $25 a unit, “within the next few months,” according to its blog.

Mozilla, known by most for creating the Firefox browser—announced on its blog Tuesday its intention to sell the smartphone, powered by a Firefox OS, in India.

The phones will retail at an astonishingly low $25, the same handset currently costs $69.99 in the US.

The company will partner with two mobile handset producers, Intex and Spice, for the venture. In their statements on Mozilla’s blog, representatives of the companies confirmed the hope that the Firefox OS will move the India phone’s market away from feature phones and toward smartphones.

The phones are already sold in Europe and Latin America.

The significant markdown may be indicative of their intention to break into an emerging market, where smartphones have proven so far too expensive to be popular. However, India’s smartphone market grew by almost a factor of two in 2012 and 2013; Samsung, Sony and Micromax (an Indian mobile phone producer) were some of the most popular.

At the same time, Mozilla announced a deal with Chunghwa, that largest Taiwanese telecoms company, to support Firefox OS. They have similar high-profile supporters across the globe, including Telefónica and Deutsche Telekom.