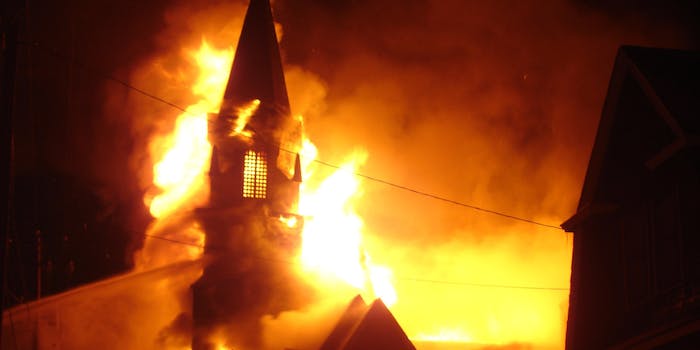 Responding with love, no matter the religion.

A coalition of American Muslim groups has launched a crowdfunding campaign to rebuild eight black churches destroyed by fire over 10 days in the wake of the Charleston shootings.

Three of the fires have been determined to be arson, one an accident, and the rest remain under investigation.

Using the Lauchgood platform, a crowdsourcing tool focusing on Muslim-led projects, Muslim ARC, the Arab American Association of New York, and Ummah Wide, have united to raise over $32,000 for the churches to rebuild.

In only six days, the campaign is within over its goal by almost $3,000, with over 800 donors, and nine more days until it concludes.

The campaign coincides with the Islamic holiday of Ramadan, a month-long period of fasting, self-examination, and scriptural reading and recitation.

In the project explanation, Faatimah Amat-Allah Knight notes, “It’s Ramadan, and we are experiencing firsthand the beauty and sanctity of our mosques during this holy month. All houses of worship are sanctuaries, a place where all should feel safe, a place we can seek refuge when the world is too much to bear.”

Knight also reminds donors that the American Muslim community and the African-American community are “profoundly integrated in many ways, in our overlapping identities and in our relationship to this great and complicated country.”

The organizers also take inspiration from the Quran, which instructs Muslims to help their Abrahamic neighbors.

“If God had not driven some people back by means of others, monasteries, churches, synagogues and mosques, where God’s name is mentioned much, would have been pulled down and destroyed,” they wrote. “God will certainly help those who help Him—God is All-Strong, Almighty”

In addition to soliciting funds for rebuilding, the campaign organizers are also encouraging use of the hashtag #WhoIsBurningBlackChurches, to petition President Obama to re-convene the National Church Arson Task Force, and to organize a solidarity event with African American churches.