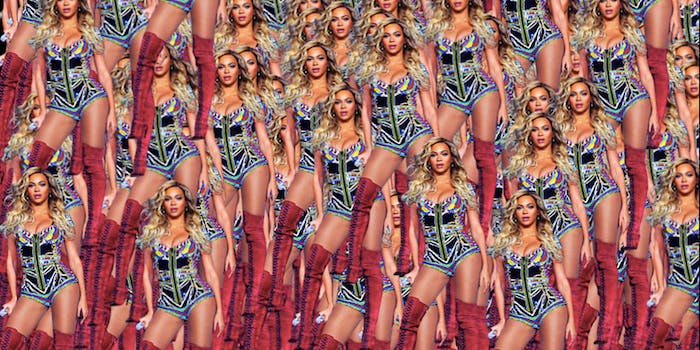 There's no such thing as too much Bey.

MTV’s new Beyoncé generator, More Beyoncé, might be a sophisticated take on consumerism. It might be an artistic interpretation of the way celebrities flood our day-to-day lives thanks to constant media exposure. Or it might just be more proof that we can never get enough Bey.

There’s isn’t much to the game—if you can even call it a game—beyond letting Beyoncé envelop your screen with her majestic elegance. Click once and get just a smidgen of Bey, a soupçon, if you will. But if her allure tempts you into holding down the mouse button, brace yourself for an avalanche of Beyoncé the likes of which the civilized world has never seen.

The flood of sassy Beys only subsides once you stop clicking, so you’ll no doubt be tempted to see just how many of the beloved singer you can summon. Let this tale serve as a gentle warning to you, the uninitiated, as to the dangers of too much Beyoncé:

In putting More Beyoncé to the test, I, too, was curious as to how many Beys I could get to bounce before my eyes. With reckless abandon, I held down my mouse button as clones flooded my screen. The first 500 arrived briskly, with an intoxicating and joyful energy that demanded I continue, so on I pushed.

Passing 800, there was no part of my browser window that wasn’t graced by a bouncing Bey, and I was happy. But there is no such thing as enough Beyoncé. At around 1,700, the first signs of trouble began to emerge. The Beys moved slower, and even the blank stare plastered across each of their faces seemed somehow less jubilant.

By the 3,000 mark, my laptop was showing physical symptoms, including a speeding fan and significant heat. But there was no stopping. The 4,500th Beyoncé looked like all those that came before her, but her message was clear: I am a monster. A monster whose appetite cannot be satisfied by 4,500 Beyoncés.

Do you know what 5,800 hopping Beys will do to a computer? They will turn it into a howling, scorching-hot shell of its former self. With 6,300 of her on the screen, I became convinced that every Beyoncé I had summoned was glaring at me.

9,478. That’s how many Beyoncés it takes before a Web browser slows down to the point that it is unusable. Your mileage may vary. Your Beyoncés will not.