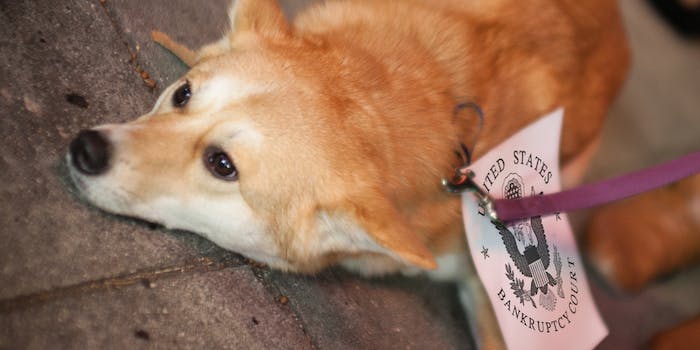 Is this the death of Dogecoin?

Controversial Dogecoin exchange service Moolah has closed its doors, prompting angry accusations of incompetence from the community that invested heavily in it.

In a blog post published Tuesday, founder and CEO Alex Green wrote, “Moolah has reached a stage where it is unable to continue operations in today’s market” and will file for bankruptcy.

Green remains a bizarre and enigmatic figure. Confusingly known around the popular r/dogecoin subreddit as simply moolah_, he was responsible for both some of the most famous Dogecoin-related charity events, most notably helping secure a Dogecoin car in a NASCAR race, and for taking more than 750 BTC ($300,000 by current exchange) from supporters as investment shares, all of which has since been lost. A Daily Dot investigation revealed seeking such investments was of dubious legality; Green repeated that he could have gotten venture capitalist money, but he preferred the freedom that comes from not being beholden to major investors.

Only one image of Green is moderately circulated online, an hour-long video of him and former COO Landon Merrill arguing with two early Dogecoin leaders; much of the video’s end is just Green threatening defamation lawsuit. He was also known as a petty tyrant, spending hours arguing online with his critics. As one redditor who claimed to be an investor wrote late Tuesday evening:

Where was the communication, Alex? The only way to even get you to acknowledge our existence was to say something negative about you on /r/dogecoin. I could submit 17 support tickets, email every single person that was affiliated with moolah, take out a half-page section of the New York Times and nothing. However, if I make a thread on /r/dogecoin titled “Alex is fat” then within minutes you’d appear, telling me how stupid I am […] You are a pathological liar at worst and the worst “CEO” I have ever seen at time/resource management at best.

Green, for his part, claims he never received any sort of salary for the 10-month duration of the company.

As a currency, Dogecoin remains far less frequently used than its heyday in January and February, but it’s still traded more than other coins, save the industry standard, Bitcoin. Its price, similarly, remains far lower than its early peak, but it’s rebounded from its lows in August.

Dogecoin creator Jackson Palmer, who publicly distanced himself from the alt-currency around the time it became so controversially embedded with Moolah, said the coin wasn’t lost. “There are still a lot of kind, humble people in the community that I enjoy hanging out with,” he told the Daily Dot. “Now that some of this drama is out of the way, hopefully it’ll pick up and we get back to just having fun.”

We have potentially found a way for our core business to remain afloat – more information will follow tomorrow.

Update 2: In a move that would be surprising if it were from the CEO of any other company, Green has announced that’s he’s not quite ready to pull the blog. Writing a blog post titled “The reports of my death have been greatly exaggerated,” published less than a day from his previous claims that his company was closing, Green now says he will reduce his staff from 19 to five, and that those remaining will “defer any salary payments until a suitable time.”

Green’s reasoning stems from a belief that he may receive funding from an outside source. In an email to the Daily Dot, he said that his earlier investors “maintain a chance of continuing to gain profit if we are able to rebound with our new plans.” He added that the most recent cash injection came from his own pockets, and that he’s chasing potential investment “options that were made available to us today.” He didn’t respond to questions about who that might be.

Photo via k pinguino/Flickr (CC BY 2.0) | Remix by Jason Reed