We talked to the developer to get the inside scoop.

A new iOS app is changing the way its users converse. Mood Chat is about sending something shorter than a voicemail but with the Internet-y flair of your #currentmood. Internet artist, goofball, and developer Tom Galle’s new iOS app Mood Chat gives conversation partners the opportunity to get away from the flat, bland, emotionally vacant text message interaction, and joyfully switch to audio messages that include a variety of background sounds. 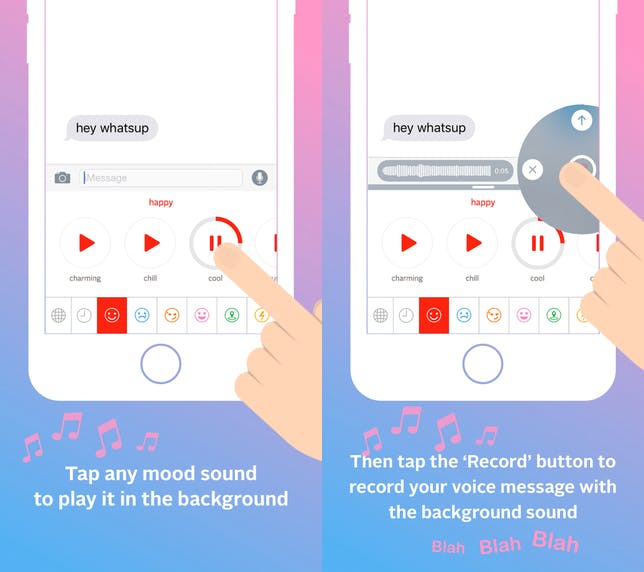 This novel feature gives every message the feeling of being in an audio-only movie of one’s life, or a throwback to leaving a voicemail for someone while playing a song in the background that matches your current mood. The Daily Dot caught up with Galle to get the inside story on the new app.

How did the idea for Mood Chat come about?

I was really interested in messaging because it became such a thing as the new social media thing after big social media like Facebook, etc. The keyboards came out, and then there was the option to make custom keyboards. My mind just went running, like: ‘I need to do something with it!’ That’s sort of how I work. In the back of my mind I always have a few subjects I’m really interested in, and then they connect for some reason. This idea came about almost a year ago.

Some ideas take a really long time, and some of them are really tacky. The selfie stick came to me as an idea and it ended up happening in two weeks. The Netflix n’ Chill Airbnb Room took about a month. The longest part of that was printing the bedsheets. The rest was just setting up a room, putting up an Airbnb, which was about two days of work.

That’s what people who reach out to me are the most interested in—often times, they’re stuck in advertising. They’re the best and working at a high level, and that sort of advertising is very demanding. I’m most interested in getting people on the Internet, capturing their attention, making a mark. I think you need something that’s talking to them in their language. What’s the point of working on something that would take half a year when the Internet moves at a much faster pace?

Many of your super Internet-y projects are parody, or poking fun at our obsessions with technology, specifically the MacBook Selfie Stick project, which is just attaching a giant selfie stick to an actual MacBook. How do you feel about parody of technology?

What I find interesting is that I’m not expressing a specific opinion to people. What I like about my work is that I am trying to give some distance between what I am building and what people can perceive of it. Some people are seeing it and getting the humor and they’re loving it. Take the selfie stick trend—people have a lot of bad reactions.

In the MacBook Selfie Stick project, we’re not pushing it in any way. People either like it and see the humor, or people see it and think about how others have difficulties with the selfie stick. So, in that way it is a critique of the selfie culture. I am not saying how you should perceive it, but I feel like giving a playground to see selfie culture in a different way.

That makes sense because I feel like all of your apps are in some way a parody of our emotional reliance on technology to communicate things that actually shouldn’t be communicated through screens. Personally I try to stay away from emotional texting and just take it to voice if there’s something more meaningful that I want to communicate. Was this part of your inspiration for Mood Chat?

It was about how we have limited means to communicate digitally—it’s either video or messaging, and I was thinking how can you get your feelings out there in a more expressive way than you are now? It’s in that same way that an emoji can touch you, sparking paths in your brain that are sparking more emotional reactions.

We were trying to push that sort of direction or angle: How can we be even more expressive? It’s coming automatically, too. I like to keep that same sense of humor, so long as I don’t try to put the humor into it. With Mood Chat, I feel like we found a way to push emotions in a funny way, and have a new way to express emotions through text which wasn’t possible before.

Would you say that you’re into that sort of distinct sarcasm found on Twitter, or “Twitter humor,” as it were?

I would generalize it as meme language. For example, there are articles out now about how Weird Facebook is having a moment. Memes have blended into the creative world, the art world, but really it’s the younger people on Twitter and Facebook who all started writing tweets in that language. I would say that 90% of my inspiration is that. I am looking on my Facebook Timeline. I am definitely part of that movement. I didn’t invent this humor.

So one of the “moods” for Mood Chat is “chill.” Can you please define chill, as it’s a vibe that carries a lot of controversy especially in the world of Tinder dating and swipe culture.

I envisioned the chill mood as more of a friendship thing. You’re texting best friends or close friends. I wasn’t thinking that people would use it to invite people over. Seems more straightforward, like: “I’m chilling.” It’s stuff that works with our lifestyle.

Will there be a Mood Chat for Android? Windows?

If we have enough users, yes. We’re doing everything as a side project, so we’re not getting paid or anything.

Mood Chat is available now for free in the iOS app store.