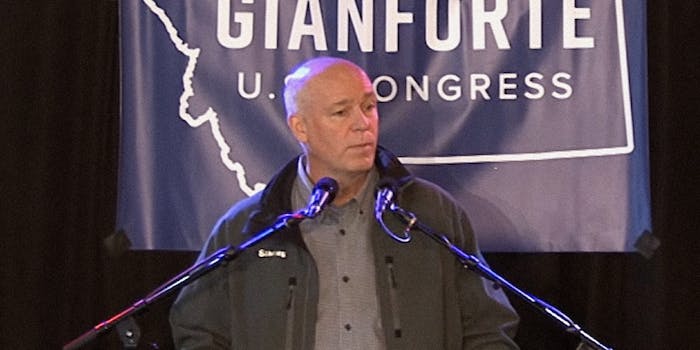 Think body-slamming a reporter is enough to knock down a politician's chances? Think again.

Greg Gianforte, the Republican candidate for Montana’s single seat in the House of Representatives, will likely win Thursday’s special election despite being charged with assault for allegedly body-slamming a journalist.

Gianforte’s recorded confrontation with Ben Jacobs of the Guardian sparked outrage across the state and nation just hours before Montana voters headed to the polls, giving Gianforte perhaps the worst possible press coverage a candidate could receive ahead of an election. Two major Montana newspapers, the Billings Gazette and the Missoulian, pulled their endorsements of Gianforte. And because a Fox News crew witnessed the alleged attack on Jacobs, the cable news giant’s conservative audience was confronted with an unvarnished view of the incident.

Why Gianforte could still win

Thing is, Gianforte’s chances of prevailing over Democratic challenger Rob Quist remain high due to a number of factors in his favor.

At Predictit, a betting market that focuses on political issues, Gianforte’s chances plummeted 26 percent within an hour, the firm said. But he continues to hold a 23-point lead over Quist, and his numbers are already creeping back up.

The counterintuitive dynamic here may be a matter of timing and the way elections really work. While no sane political operative would tell a candidate that there’s ever a good time to commit assault, the fact that Gianforte allegedly did so the night before the election—as opposed to, say, two weeks before—may be his saving political grace. That’s because an estimated majority of Montana voters had already cast their votes via mail-in ballots before Gianforte’s confrontation with Jacobs.

As the New York Times reports, more than 250,000 mail-in ballots had already been received prior to Wednesday night—an estimated two-thirds of the total expected vote. (Montana voters are not permitted to change their absentee ballots.) Just over 500,00 voters cast ballots in the 2016 presidential election, and special elections for House races historically have lower turnout.

Although the Gianforte–Quist race was tighter than one might expect in a state where Trump trounced Democrat Hillary Clinton by more than 20 points, he remained in the lead in most recent polls (all of which were conducted before the body-slamming fiasco). Further, Montana hasn’t elected a Democrat to the House in 23 years. And while coverage of Gianforte’s run-in with Jacobs may be overwhelmingly negative, a lot of people think the reporter deserved the violence, so it shouldn’t be assumed people are going to drop their support for Gianforte because of what allegedly occurred.

On top of all that, President Donald Trump recorded a robocall in support of Gianforte, urging his supporters to get out and vote. (This, despite robocalls being illegal in Montana.)

To sum up: Enough people may have voted prior to Gianforte’s alleged attack on a journalist for the incident to swing the election, and people with real money on the outcome think he’s still the odds-on favorite.

Why Gianforte should still be worried

All that said, Quist still has a chance of beating Gianforte, particularly if the body-slamming incident inspires people to get out and vote against him when they otherwise would not have. Montana has just under 700,000 registered voters, opening the door for a whole lot of wildcard scenarios if turnout is higher than expected.

On top of that, Quist is now receiving added support from big-name progressives like Sen. Bernie Sanders (I-Vt.), whose base has come out swinging against Gianforte.

As with so many things in politics these days, America will likely just have to wait and watch what happens. If you plan to stay up into the night to keep tabs on the Gianforte–Quist race, watch for results from Yellowstone and Cascade counties. Were Quist to fall down there, it may be impossible for him to get back up and fight to victory.