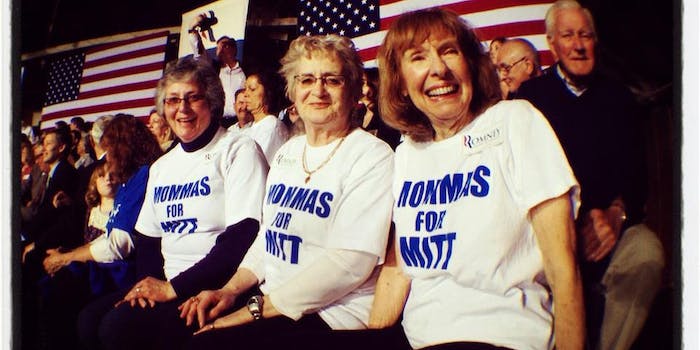 Earlier this spring, Republican presidential candidate Mitt Romney said he was in tune with the issues that concerned women the most because he talked to his wife. Now he has a Facebook page to source as well.

Moms for Mitt was launched last month as a way for Romney to stay connected with mothers, some of whom got riled up after Hilary Rosen’s controversial remarks about Ann Romney in the last installment of what some are calling the “War on Women.”

The page has received more than 81,000 likes. Most of the posts address how the current economy is hurting stay-at-home moms and housewives.

“Over the weekend we asked why you were a ‘Mom for Mitt.’ Our first featured response comes from Christina E. who says she is a ‘Mom for Mitt’ because she watches every penny in her household budget,” the campaign posted, “and she thinks the government should do the same.”

Of course not everything that is posted is pro-Romney.

“Really hope your kids do not ‘turn up’ gay and you do not ever find yourself poor,” Amandalyn Jackwagon wrote. “Good luck with that and getting Etch O Scetch elected.”

The recent news of President Barack Obama supporting gay marriage even made the page, when Patricia Lee Glover-Wilt wrote, “The Good Lord must be looking down on our president and his ‘ new Views’ and saying, ‘NOT’!!!”

But is the page the talk of town? Well it was. Soon after it was launched it gained more than 82,000 mentions and about 50,000 likes. However, it appeared that it was slowly climbing once again late this week.

Of course, this new Facebook page isn’t the first time the former Massachusetts governor has taken to social media to win over the opposite sex. Romney has also used YouTube extensively.