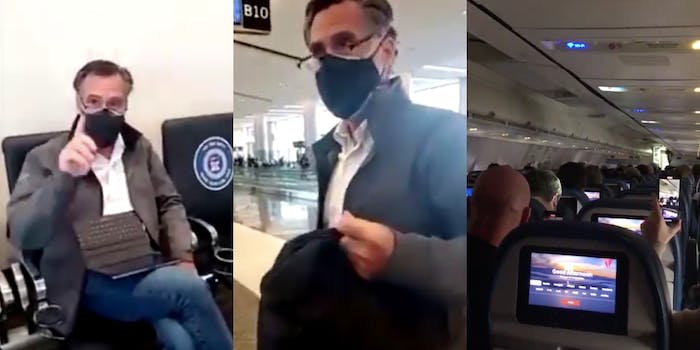 It was not the only instance of harassment from pro-Trump passengers on Tuesday.

Supporters of President Donald Trump heckled Sen. Mitt Romney (R-Utah) on a Tuesday flight from Salt Lake City to Washington, D.C., calling the presidential also-ran a “traitor” and urging him to resign.

One woman encourages her fellow pro-Trump passengers to “let [Romney] know what we think,” at which point several people begin changing, “Traitor! Traitor!”

Romney, who served as the GOP’s 2012 presidential nominee, has drawn the ire of Trump supporters for criticizing the president’s attempts to pressure Republicans into reversing the election results. In a recent statement, Romney called the plan by several Republican senators to oppose the election results an “egregious ploy” that “dangerously threatens our Democratic Republic.”

Romney’s fellow Delta passengers aired their grievances with him, urging the senator to resign and pressing him on his connections to the Biden administration.

“Resign, Mitt!” one woman shouts in the video. “We want to know your connections to Burisma and Joe Biden.” (Hunter Biden served on the board of Burisma, a Ukrainian oil and gas company.)

“Mitt Romney, you don’t listen to your constituents,” the woman continues.

When another passenger defends Romney, the woman retorts, “You’re one of maybe like a million people who think opposite of you.”

Prior to boarding the flight, a maskless passenger filmed herself confronting Romney inside the Salt Lake City International Airport.

When Romney tells her to put a mask on, she snaps, “Don’t tell me what to do.” She then agrees to cover her face and asks Romney, “Why aren’t you supporting President Trump?”

“I do support President Trump in things I agree with,” Romney responds.

When asked why he won’t support Trump “in the fraudulent votes,” Romney says, “We have a Constitution, and the constitutional process is clear. I will follow the Constitution, and I will explain all that when we meet in Congress this week.”

As Romney walks away from the woman, she calls him an “absolute joke” and “disgusting shame.” Another man who is filming says, “Trump is a juggernaut. Your legacy is nothing.”

Romney was not the only person harangued by Trump supporters at 30,000 feet on Tuesday. Another viral video shows a passenger on an American Airlines flight from Texas to D.C. projecting a Trump 2020 logo onto the plane’s ceiling.

When a passenger cursed out a Trump supporter who insulted Biden, a chorus of pro-Trumpers roared back, calling the man a “piece of shit” and accusing him of threatening them.

“Stand up, boy!” one Trump supporter yelled at the passenger, a Black man.

Another Trump supporter said, “These are the guys we came to fucking wipe out.”