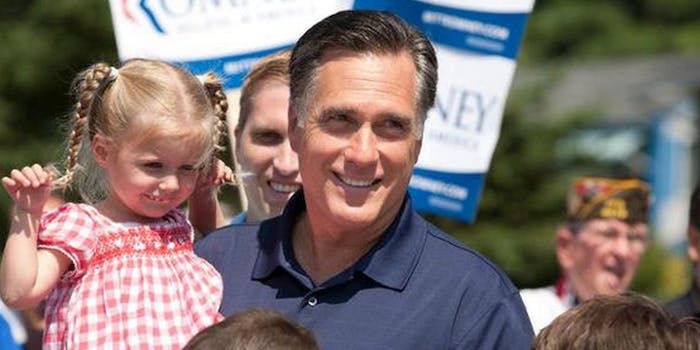 Thanks to a bevy of investments, noted man of wealth and Conservative coif Mitt Romney made it through his 2011 taxes by paying a lower tax rate than most middle-income Americans.

“Taxes are good for America,” Burke told the Daily Dot. “They pay for things like disaster recovery and roads. And schools! I don’t care if there is waste. Waste is a fact of life. I’d rather have waste and marginally more money for when things like Katrina happen than have no waste and a small group of people hoarding cash in gated communities.”

Raising $3 million will be no easy feat. But it’s certainly well-intentioned. Burke says that all proceeds made off the fundraiser will go towards the public school system in Detroit, Mich., Mitt Romney’s hometown.

“I have no idea what his relationship with the Detroit public schools is like,” Burke said. “I know that he transferred into a private school when his family moved to Bloomington Hills.

“But he was born in Detroit and his father made his money by employing men and women from Detroit, who were likely educated in the Detroit public schools. But mostly, I think Detroit needs it more than, say, Belmont, Mass. Belmont is nice and has great schools. Detroit… things are tough there, I hear.”

Tough enough that they could really use $3 million in the name of goodwill.

Open your wallets, people. Don’t do it for Mitt Romney. Do it for the kids.