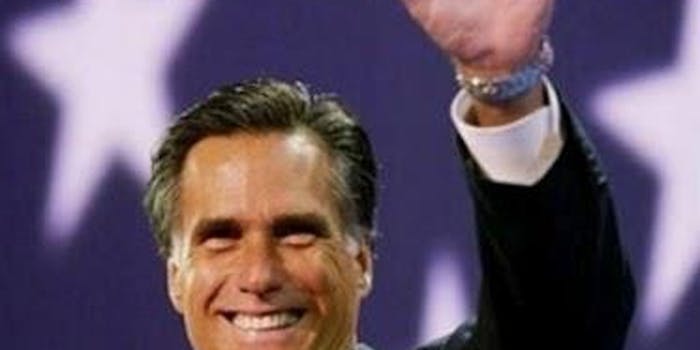 An image macro making the rounds on Facebook juxtaposes the presidential candidate's stance on gay marraige with his family's history of polygamy.

In the wake of President Obama’s declaration of support for gay marriage, Americans are turning toward Republican hopeful Mitt Romney, who’s said in the past that for “3,000 years of recorded history […] marriage is an institution between a man and a woman.”

As many have noted, however, Romney’s ancestors practiced polygamy.

In an image macro written like a Scumbag Steve joke, the photo shows Romney waving to a crowd. The overlaid text reads:

“Says marriage has been ‘one man and one woman’ for 3,000 years / Great-great-grandfather had 12 wives.”

The photo has been shared more than 7,000 times, and the number is steadily rising.

Romney, for his part, has condemned polygamy, and Obama has declared Romney’s religion “off limits” for his campaign. That hasn’t stopped Facebook users from partisan bickering, though.

“So was Obama’s great great grandfather on his father’s side,” Brena Easterday wrote.

Perhaps someone should read their Bible. “One man, one woman?  King Solomon had 700 wives, and God allowed him to build the ‘Great Temple of Jerusalem,’” John C. Moody wrote.

Roy Sook, however, had a different angle.

“[W]e all know a perfect marriage should be one woman and a dozen men, at least,” he wrote. “[A]pparently that is what my first wife thought, that was about how many she was servicing. 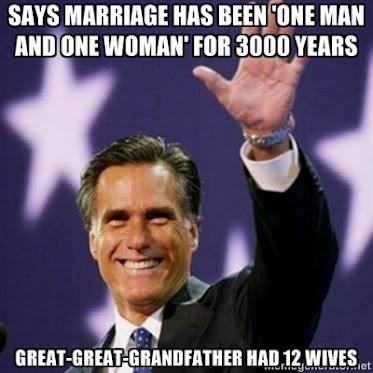