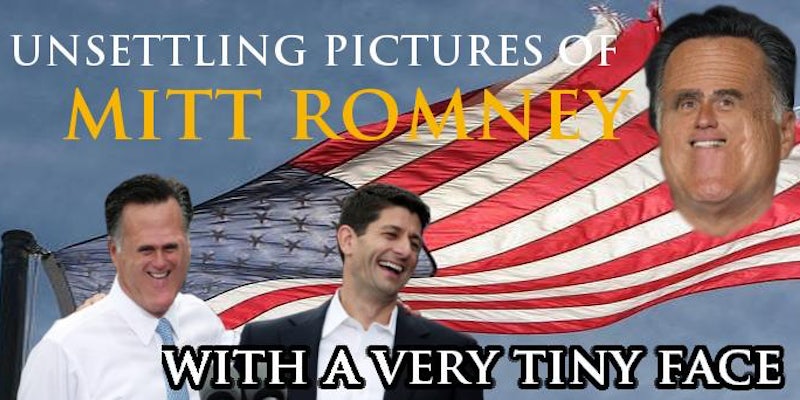 Little Face Mitt creator talks about his small part in the 2012 presidental election.

By now, everyone knows Republican nominee Mitt Romney. However, a lesser-known man has also entered the scene, and you’ve probably seen his work. Reuben Glaser has been contributing to the Romney campaign in a very, very little way: by literally shrinking the former governor’s face. You’ve seen him as “Little Face Mitt,” and there’s something utterly amusing about the Republican’s shrunken eyes, nose, and lips on his normal-sized head.

Daily Dot: Where did the idea to “little” Mitt Romney’s face come from?

The root of Little Face Mitt was, essentially, the profound realization that Mitt with a little face would be quite a laugh. At its core, that’s what it was. But sometimes I’m a dog with a bone and I like to keep running when I know I’ve got something good.

Really, it first came from the picture The Onion used in their article about Mitt Romney being submerged into weeks of uncomfortable laughter to the point of paralysis of mind and spirit. The article itself, complete with Mitt gently sobbing through chuckles as tears rolled down his twitching cheeks, was sterling of the usual untouchable Onion caliber, but the picture they used was the most entertaining part of not only the article but the entire Romney campaign thus far, so I saved it on my iTouch.

I also enjoy the story of Mitt Romney describing lemonade as “Lemon, wet, good,” so I had taken to the habit of regaling people with that anecdote of pure absence of personality to mediate the political arguments I often found myself in.

DD: What’s so funny about it, do you think?

I pictured Mitt saying “lemon, wet, good” with either a sense of grim intensity or through awkward giggles. The picture to match up with the latter came first, of course. So at one point I zoomed it in during the lemon wet good tale and showed my friend Sizzler and the idea was borne to my brain.

I had accomplished the impossible: a way to make Mitt interesting.

DD: And now you had your inspiration: where do you go from there?

So the original intent was to post a few pictures and hope a couple people would use them on their blogs because as a young college student not born choking on a silver ladle who appreciates character, I’ve never much cared for Mitt Romney. 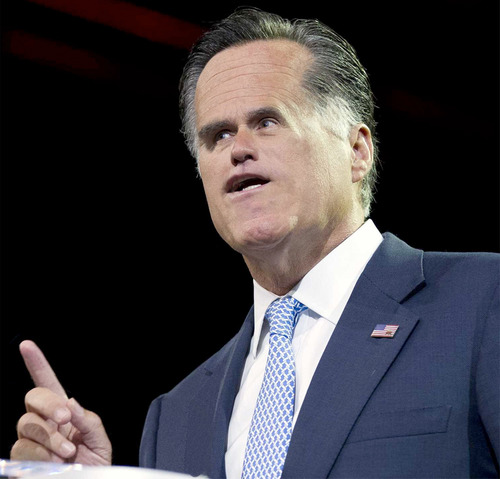 I knew that SNL had earnestly tried their hardest to find something funny about Mitt’s personality and failed, so the next best thing would be making something up such as Mitt having a nonexistent tiny face but never really mentioning it.

DD: How has the response been?

I probably made about 50-75% of the Little Face Mitts myself thus far (more at the beginning than now), and it took plenty of hours. But I can also say without a shadow of a doubt that the response has convinced me it was not time wasted. And I thank all those who continue to submit them. Most of you are miles better at shrinking Mitt’s face than I am and you are the backbone.

DD: Now that we’ve shrunken Mitt’s face a bit, where to now?

In the back of my mind, I hoped at least a couple people would begin using the Little Face Mitt pictures exclusively on their blogs to the point that the number of instances they saw Little Face Mitt outnumbered the number of times they saw Normal Face Mitt until Normal Face Mitt became the thing that looked unusual. It was a monumental task, but looking at some of the messages and tweets and emails I’ve received, I feel like I have accomplished it on some level.

DD: How can we elevate Little Face Mitt?

I don’t know how long this will all stay afloat and if the Tumblr has much more steam in it, but I can only hope it does. It’s a project, after all. It will only have any longevity if people keep using the pictures on their websites or on TV or something.

Who here thinks SNL should only use Little Face Mitts during Weekend Update? I do!

I realize that Little Face Mitt will likely be relegated to the footlocker of memedom after a while, but until then I am having the time of my life and I hope everybody else is too. Doing our best to make Mitt Romney at least remotely interesting is the least we can do for our country.