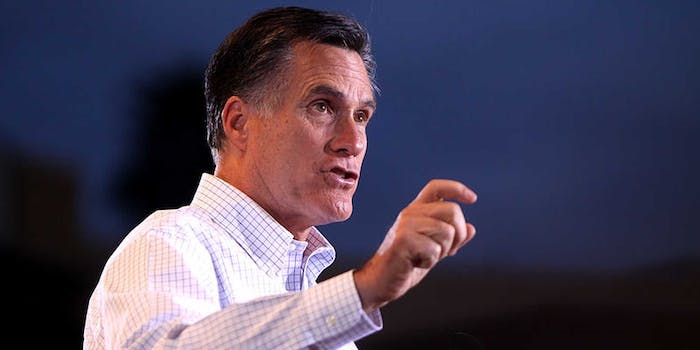 Ann has way more than 47 percent of Mitt's heart

In the two years since former Massachusetts Governor Mitt Romney failed in his effort to unseat President Barack Obama, his image has gradually softened from that of a business robot programed to hate 47 percent of the American public. For example, there was the Netflix documentary, Mitt, which provided a sympathetic and intimate portrait of the Romney family on the campaign trail.

Now, in a post on the blogging platform Medium published on Tuesday morning, Romney penned an public love letter to his wife, Ann, that also happens to effectively serve as a press release for the opening of the Ann Romney Center for Neurologic Diseases. It may be a press release, but it’s easily one of the most adorable press releases I’ve ever received—and I get a lot of press releases.

Accompanied by a picture of a young Mitt Romney laying on the beach inside of a giant heart that says “I love Ann,” the letter reads:

You’ve come a long way. It’s been over fifteen years since we sat in the first neurologist’s waiting room, looking at his office brochures that described ALS, Parkinson’s, and Multiple Sclerosis. We could handle anything, I said, as long as it wasn’t terminal. Your right side had been numb for several weeks, and the numbness was spreading. You were struggling to walk up stairs.

After all the tests, the diagnosis was MS. No cure, but treatment might slow its progress. Then came years of Dr. Weiner’s medical care, innumerable reflexology sessions with Fritz Blietschau, hours on horseback, priesthood blessings and prayer. What a miracle it was four years later to see you run the Olympic torch into Salt Lake City.

From one of the wounded, you have become one of the warriors. I could not be more proud of the 15 year old girl I fell in love with almost 50 years ago.

The Ann Romney Center was born out of a cookbook she wrote soon after the 2012 election. Proceeds from the cookbook were to go to funding research at Bringam and Women’s Hospital, which is in the Boston area and affiliated with Harvard University. However, according to an interview with the Los Angeles Times, Romeny became intrigued by new research on Alzherimer’s Disease being conducted by her doctor and decided to switch tracks. She created an organization that coordinates ongoing research for a whole host of different brain diseases.

Recent weeks have seen a boomlet of speculation that Mitt Romney will mount a third consecutive run for the Oval Office. Stories with titles like “Can’t quit Mitt: Friends say Romney feels nudge to consider a 2016 presidential run,” have been popping up in outlets like the Washington Post and elsewhere.

While Romeny has given the standard denials about not having any presidential ambitions for 2016, he did indicate in a recent interview on The Hugh Hewitt Show that “circumstances can change.”