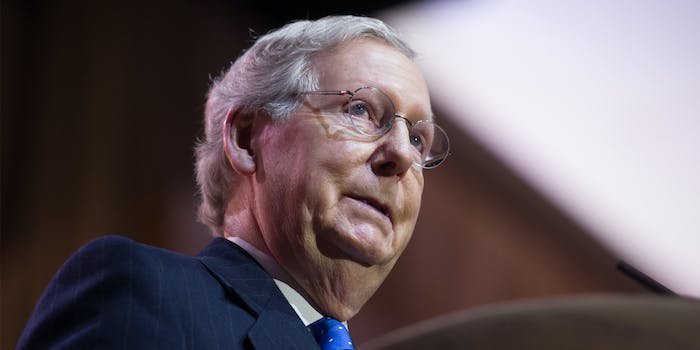 Many blame McConnell for bringing the U.S. to this point.

Twitter users are lashing out over Mitch McConnell’s response to the bombshell Politico report alleging that Roe v. Wade will be overturned.

In the statement, Republican Senate Leader McConnell refers to the leaked majority opinion drafted by Justice Samuel Alito as a “stunning breach” and an “attack on the independence of the Supreme Court.” McConnell said the leak was “yet another escalation in the radical left’s ongoing campaign to bully and intimidate federal judges and substitute mob rule for the rule of law.”

Twitter users were quick to levy criticism at the 80-year-old Senator.

Another user pointed out the hypocrisy of McConnell’s statement, noting that McConnell himself attacked the independence of the court by refusing to allow former President Barack Obama to fill a Supreme Court seat in his final year as President. McConnell has called the decision “one of my proudest moments.”

“This statement is entirely about the leak,” said Stephanie Ruhle, a commentator for MSNBC. “It is NOT about women’s health.
What matters most to the people of Kentucky?”

McConnell’s statement called for an investigation into the leak.

“This lawless action should be investigated and punished as fully as possible,” McConnell wrote. “The Chief Justice must get to the bottom of it and the Department of Justice must pursue criminal charges if applicable.”

Roe v. Wade, a 1973 landmark decision by the Court, has protected the right to abortion in the US for nearly half a century. It has played a role in several Supreme Court decisions, dating back to San Antonio Independent School District v. Rodriguez, decided just two months after Roe v. Wade. Thirteen states have trigger laws that would effectively outlaw abortion should Roe be overturned, including Texas, Louisiana, and Kentucky.