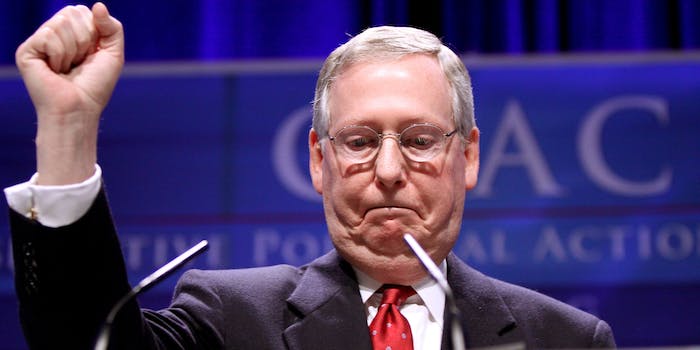 Senate Majority Leader Mitch McConnell (R-Ky.) has a novel idea for how to address the looming problem of the controversial spying provisions in the Patriot Act that are set to expire June 1.

Just reauthorize it all.

McConnell’s short bill, fast-tracked to avoid having to go through committee markup, would “extend authority relating to roving surveillance, access to business records, and individual terrorists as agents of foreign powers under the Foreign Intelligence Surveillance Act of 1978 and for other purposes.”

The Patriot Act provides the legal basis for a number of the most powerful National Security Agency spying programs revealed in 2013 by former NSA systems administrator Edward Snowden. Those include Section 215, which lets the NSA collect innocent Americans’ phone records in bulk,” and which would be reauthorized under McConnell’s bill.

As it was first passed in 2001 and reauthorized in 2006 and 2011, this is the first time since Snowden’s revelations that Congress, or the public, has dealt with Patriot Act reauthorization. One bill, the USA Freedom Act, would provide some NSA reform, though privacy advocates have argued it’s not strong enough, and it still has to shore up supporters.

“Republican leaders should be working across the aisle on legislation that protects both our national security and Americans’ privacy rights, but instead they are trying to quietly pass a straight reauthorization of the bulk collection program that has been proven ineffective and unnecessary,” Sen. Patrick Leahy (D-Vt.) said.