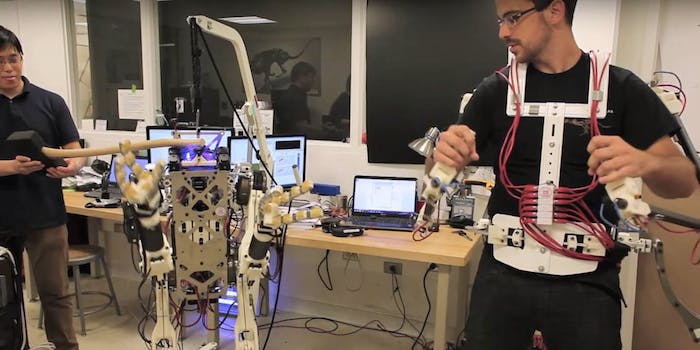 We spoke to Joao Ramos, one of the researchers on the team.

A team of researchers at the Massachusetts Institute of Technology (MIT) has developed a robotic system called HERMES that is controlled by a person wearing an electronic exoskeleton. His or her movements inside the suit translate into movements for the robot to copy instantaneously.

It presents itself as something of a remote-control human being: lightweight and agile, yet equipped with powerful motors capable of channeling a lot of energy toward whatever the human operator likes. In other words, it’s a lot like Real Steel.

And here’s real-world science in 2015 (with the operator and suit visible in the background):

Joao Ramos, one of four researchers on the team, says he likes to think of this project as “trying to put a human brain inside the robot.” He explained to the Daily Dot via phone that “humans are more creative and better at coming up with solutions to problems than robots are.” Rather than depend on complicated artificial-intelligence algorithms to make the robot autonomous, they’re using human intelligence to control it in real time.

In a sense, this is a robot with human reflexes.

One of the most compelling features of this system is that it can provide the operator with feedback about what the robot is experiencing, closing the loop between man and machine in a meaningful way. If the robot leans forward while carrying a heavy load, the operator’s exoskeleton will also push the operator forward, signaling that the operator ought to correct his or her posture. In a sense, this is a robot with human reflexes.

The MIT team has devoted all its efforts to this project since February 2014, building everything from the ground up. Ramos imagines future generations of this system being most useful in disaster situations. He cited “fire hazards, nuclear disasters, bomb disposals, police interventions. Anything that would require a person to be there to help, we can help keep that person out of harm’s way.”

In the future, HERMES will be a quadraped robot, more animal-looking than humanlike—similar to Boston Dynamics’ Big Dog line. “There’s no reason to have a bipedal robot—it’s much more difficult to balance. So we will implement a transition between the two modes,” Ramos said—effectively taking some cues from Transformers as well.