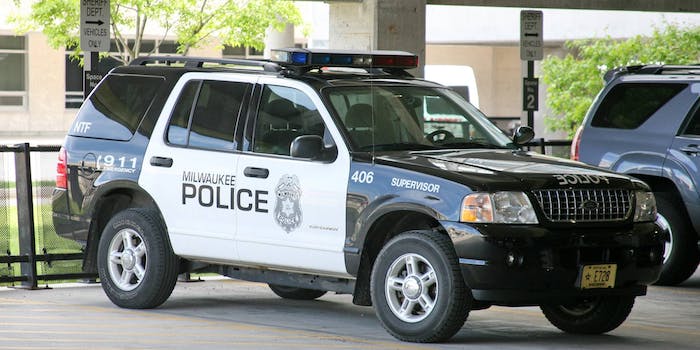 The area was reportedly under control at around 2:20am.

Hours after Milwaukee police fatally shot an armed man after he fled a traffic stop, demonstrators rioted in the city’s predominantly black north side.

Milwaukee’s north side has seen a rash of violence as of late, with a double homicide occurring just days prior as well as incidents of an increased police presence in the neighborhood.

Protestors set a gas station ablaze along with multiple businesses and vehicles. An officer was sent to the hospital after sustaining injuries from a demonstrator smashing a brick through a squad car window. Others threw rocks at police. Following the hours long incident, three people were arrested.

Just had rocks thrown at me photographing this burn car at Sherman Blvd near Auer. Police now retreating. Me too! pic.twitter.com/d5CNyHAQGs

A large group converges on and rocks a car in tonight's unrest. Our coverage here: https://t.co/SXZrbUUuzt pic.twitter.com/TTQijr2hae

Crowd breaks widows of unoccupied squad near Sherman and Auer. Other squad set afire and broken windows on another. pic.twitter.com/Jux2mJZYyQ

Authorities stated that the area had been quieting down and returning to normal at around 2:20am. The violent demonstration comes just 24 hours after a string a shootings left five people dead throughout the city, from Friday night to Saturday morning.

Little information has been released about the suspect of the Saturday afternoon incident, whom officers describe as a 23-year-old with a lengthy record. The weapon that the man was carrying as he gave chase was reportedly a stolen semiautomatic handgun obtained in a March robbery 20 miles away in Waukesha. He was reportedly shot twice.

The suspect was traveling with a passenger, who also fled after the vehicle was stopped at around 3:30pm on Saturday. According to police, the officer involved was wearing a body camera and has since been placed on administrative duty.

Barrett: "Important to remember that no matter what, a young man lost his life last night", says family is undoubtedly hurting #Milwaukee