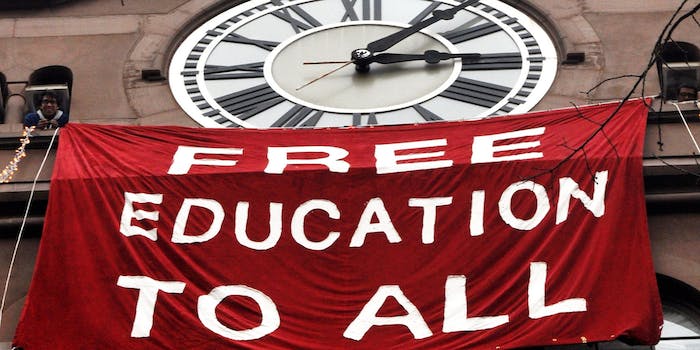 You had one job.

The first rule of being interviewed on television news is to have good answers to obvious questions prepared in advance. Fail that, and this happens.

Mullen explained to Cavuto that the Million Student March is a pushing for “a more equitable and fair system of education as opposed to the really corporate model we have right now.” This means free college tuition and a forgiveness of all college debt, which clocks in at more than $1 trillion in total. The campaign also wants a $15-per-hour minimum wage for campus workers.

Cavuto followed this up by asking, “How is that going to be paid?” And Mullen answered with, well, just watch.

Sanders’ plan would cost $70 billion per year, two-thirds of which would be funded by federal government-imposed fee hikes on stock trades, with the remaining $23 billion per year coming from states. Clinton’s proposal would cost approximately $35 billion per year over 10 years paid in part by federal subsidies to states and requires the reduction in tuition costs at public universities. Both Sanders and Clinton want to lower interest rates on student loans. O’Malley has not announced the costs of his plan.

In short, the cost of higher education is clearly a politically potent topic. And while the Million Student March was inspired by Sanders’ plan for free college tuition, its organizers might want to beef up on the details before signing on for another interview.