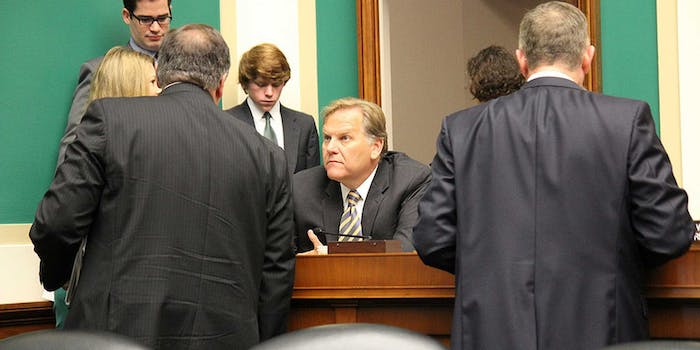 Did the author of CISPA try to silence his biggest critic?

Rep. Mike Rogers (R-Mich.) is far from the most popular guy on the Internet. But could he be planning to sue those who speak out against him?

This week, it was reported that a member of Rogers’ staff told a Michigan-based journalist that the congressman could sue Techdirt’s Mike Masnick for defamation based on critical statements the tech blogger has made in the past.

Rogers, a former FBI agent and co-sponsor of the wildly unpopular Cyber Intelligence Sharing and Protection Act (CISPA), has taken his fair share of threats and criticism for his stance on cybersecurity and Internet regulation. But the battle of Rogers vs. the Internet has apparently escalated.

On Tuesday, Masnick wrote on Techdirt that the other reporter had contacted him about the comments made by an unidentified member of the congressman’s staff.

“The reporter told me that the staffers said they’re ‘well aware of’ me, but that they felt I was ‘an extreme liberal’ and that I was using ‘liberal’ talking points to attack him. Also, according to this reporter, they said that they could sue me for defamation concerning things I’d said about Rogers. Yes, it’s come to this.”

Kelsey Knight, a spokesperson for Rogers, denied that anyone on the congressman’s staff made such comments.

“Nobody made this claim,” Knight told the Daily Dot.

Knight went on to identify the reporter the comments were supposedly made to, Christopher Behnan of the Livingston Daily. Behnan would not comment on this story, but referred the Daily Dot to Rogers’ chief of staff, Andrew Hawkins. The Daily Dot reached out to Rogers’ office for a direct comment from Hawkins, but had not received a response as of late Thursday afternoon.

Masnick asserts that his previous reporting on Rogers and CISPA doesn’t rise above the normal level of Internet snark to reach the kind of libelous untruths required to bring a  successful defamation suit.

“We stand by the things we’ve written about Rep. Rogers and find it rather unbecoming of an elected official to try to chill the free speech of those who criticize his statements and actions with implied threats of lawsuits to silence their public participation,” Masnick wrote.

These comments will do little to help improve Rogers’ online popularity. The former g-man has been CISPA’s lead proponent in the House. He argues that such a bill is necessary to protect America’s government and business infrastructures from foreign cyberattacks.

“[T]he biggest cyber threat we face today [is] the continual pillaging of nearly every sector of our economy by nation-states like China, who are stealing the core research-and-development secrets at the heart of our innovation economy,” Rogers wrote in an op-ed last year.

Though the threat of cyber warfare is certainly serious, Rogers’ advocacy on this issue is often undercut by dismissive comments he’s made about those who disagree with him. On one occasion, he even referred to his typical opponent as a “14-year-old tweeter in the basement.“

Not surprisingly, the Internet community seemed to line up firmly behind Masnick on this one.

Criticizing a senator is “defamation”. These leaders are the ones we’re supposed to trust with all the surveillance. http://t.co/1epWtWLQxa