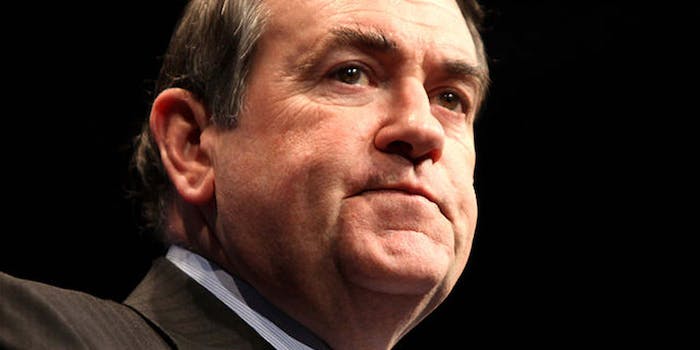 What’s the best indication so far that Mike Huckabee will never be elected President of the United States?

In an interview published in People magazine earlier this week, the former Arkansas governor and Fox News talk show host criticized the pop superstar not only for her racy lyrics, but also for letting herself be “pimped” by her husband, rapper Jay-Z. Huckabee also took the opportunity to slam President Obama for letting his daughters listen to her songs.

In the interview—which the Republican Baptist minister used to promote his upcoming book, God, Guns, Grits and Gravy—Huckabee insisted that the lyrics of the Beyoncé–Jay-Z duet “Drunk In Love” were inappropriately steamy and said that the Obamas shouldn’t let their two teenage daughters listen to them.

“I don’t understand,” Huckabee said, “how on one hand they can be such doting parents and so careful about the intake of everything—how much broccoli they eat and where they go to school and making sure they’re kind of sheltered and shielded from so many things—and yet they don’t see anything that might not be suitable for either a preteen or a teen in some of the lyrical content and choreography of Beyoncé, who has sort of a regular key to the door [of the White House].”

In an excerpt for his book published by People, Huckabee writes, “Beyoncé is incredibly talented – gifted, in fact. She has an exceptional set of pipes and can actually sing. She is a terrific dancer—without the explicit moves best left for the privacy of her bedroom. Jay Z is a very shrewd businessman, but I wonder: Does it occur to him that he is arguably crossing the line from husband to pimp by exploiting his wife as a sex object?”

Early this month, Huckabee announced that he would be ending his Fox News show in advance of a possible run for the White House.

There has been a great deal of speculation as to whether I would run for President. If I were willing to absolutely rule that out, I could keep doing this show. But I can’t make such a declaration. I won’t make a decision about running until late in the spring of 2015, but the continued chatter has put Fox News into a position that is not fair to them nor is it possible for me to openly determine political and financial support to justify a race. The honorable thing to do at this point is to end my tenure here at Fox. As much as I have loved doing the show, I cannot bring myself to rule out another Presidential run. So as we say in television, stay tuned!

This effort wouldn’t be Huckabee’s first presidential campaign. He was an early frontrunner in the 2008 GOP primary, but ended up losing handily to John McCain after a strong early showing in the Iowa caucus.

If he wants his 2016 presidential effort to turn out better, Huckabee might want to pick a less beloved target for his culture-war ire than Beyoncé. In a recent Harris Interactive survey of American adults, Beyoncé was rated as the third most popular musician in the country, behind only The Beatles and Elvis Presley. She beat mainstays like Led Zeppelin and George Strait. In fact, in light of Strait’s recent retirement, Beyoncé was the only active musician to appear in the survey’s top five favorite artists.

Trying to catch some of the goodwill reflected off of the Beyoncé halo might be a more shrewd political move.

Even though Huckabee, who plays bass guitar himself, isn’t a fan of the former Destiny’s Child frontwoman, that doesn’t mean he hates all popular culture. A lifelong lover of the Rolling Stones, Huckabee, while still governor of Arkansas, officially pardoned Keith Richards in 2006 from a reckless driving charge that the guitarist racked up in the 1970s.

Unlike Beyoncé, Richards is an exemplary, upstanding citizen who has never done anything objectionable and has exclusively made music extolling strong Christian virtues, most notably chastity.